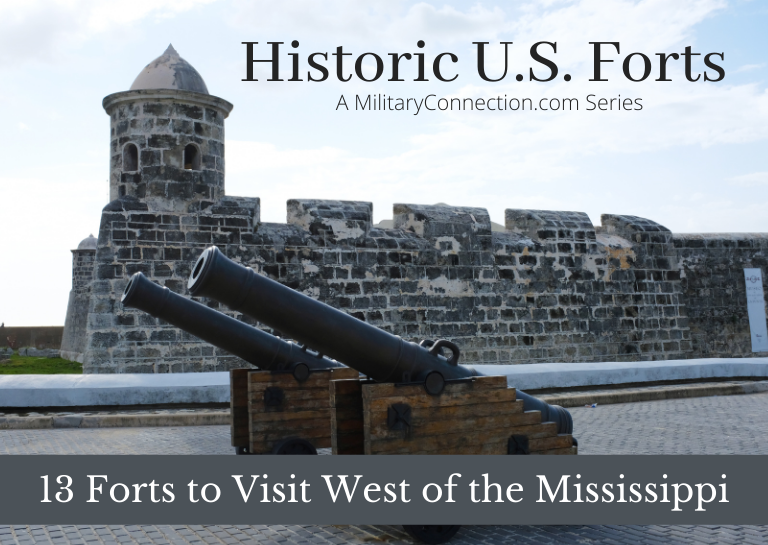 Most historical forts west of the Mississippi were established as trading posts or for protection of travelers, infrastructure, or local settlers during the Frontier Wars. However, many of them came to be critical sites during the Civil War, with garrisons preventing advancement of Confederate forces further into the Western Territories. Some of these forts remained in existence after the Civil War and also played important roles in other conflicts such as the Mexican American War, WWI, and WWII. Here are 13 historic U.S. Forts to visit in the west. 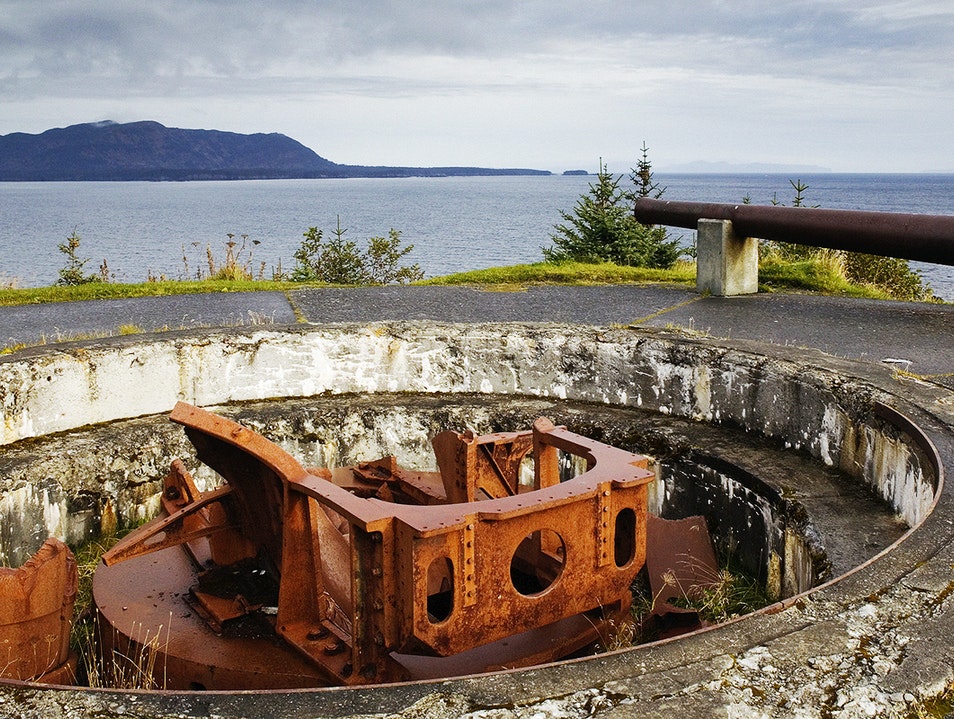 This World War II costal defense installation was a sub-post of fort Greely and included two Mark VI battleship guns to protect the naval installation. Fort Abercrombie is now an Alaska State Park and a National Historic Landmark with WWII artifacts on display. The former Ready Ammunition Bunker is home to the Kodiak Military History Museum which is open on weekends in season and by appointment for WWII veterans. 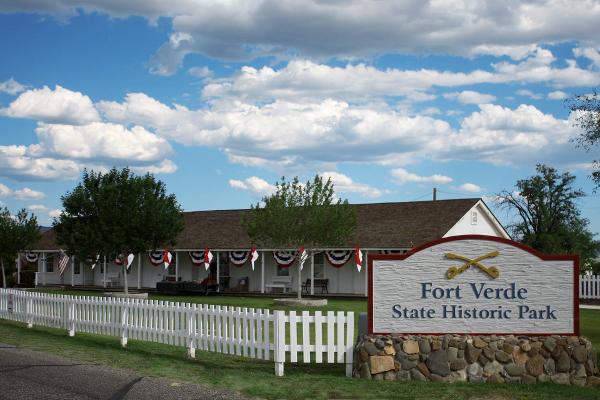 Built in 1871, Fort Verde served to protect local farms from raids by Apache and Yavapai tribes, but walls were never erected and the fort never saw fire. Now Fort Verde State Historic Park, the former military headquarters building houses the main museum which includes exhibits, photos, and artifacts from former area soldiers, Indian scouts, and settlers. The Commanding Officer’s Quarters, Bachelors Quarters, and Doctors and Surgeons Quarters all remained furnished as they were in the 1880’s and are available to tour.

Fort Alcatraz during the late 19th century. // Photo via nps.gov

Fort Alcatraz was actually once the most powerful forts in the United States west of the Mississippi. It was established for protection in response to the 1849 gold rush but ended up being most important during the Civil War. It eventually became an official military prison. When military funding was cut during the depression, the Bureau of Prisons purchased the Alcatraz Civil War Fort, establishing Alcatraz as the penitentiary we know today. 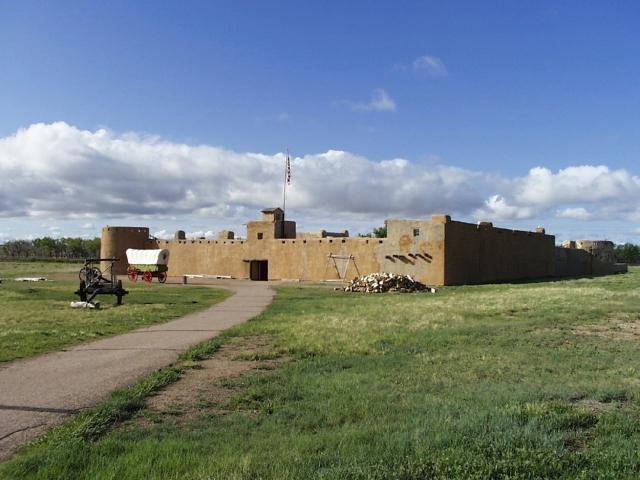 Situated along the Santa Fe National Historic Trail, Bent’s Old Fort was built in 1833 as a fur trading post. As the only major white settlement between Missouri and Mexico, the fort became a popular place for travelers and the military to stock up on supplies, repair wagons, and purchase or trade livestock. During the Mexican American War, Bent’s Old Fort became a staging area for the Army. Today, the Bent’s Old Fort National Historic Site features a reconstructed version of the adobe-style post, and tours of the fort as well as livestock demonstrations are offered daily. 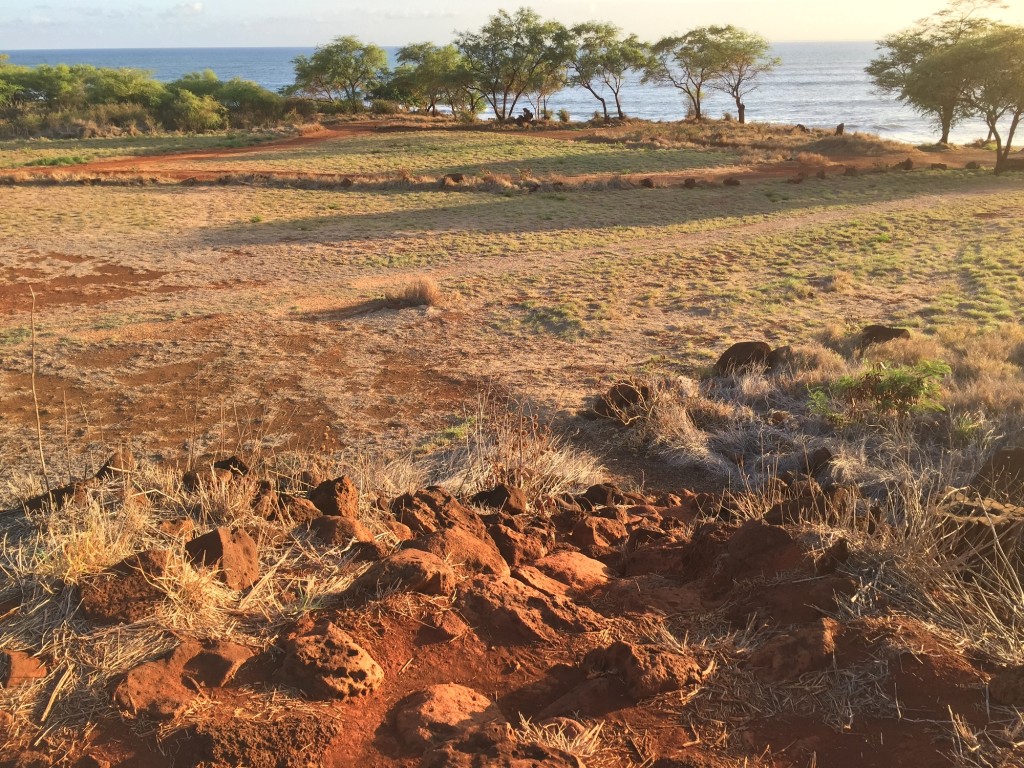 Built in 1817, Russian Fort Elizabeth was established as a result of a short-lived alliance between the Russian American Company (RAC) and the High Chief of Hawaii, which is why the stacked stone walls represent a combination of Hawaiian construction and Russian design. Shortly after completion of the fort, RAC left the island, and the Hawaiians maintained use of the fort until it was dismantled in 1864.

First constructed in 1834 for the purpose of fur trading, Fort Hall was sold to the British in 1837, became an American fort once again in 1846, and became a key stopover in the 1850’s for travelers of the Oregon Trail. Today, a full scale replica of the Fort, including a saloon, bank, courthouse, church and school, is available to tour in Pocatello, Idaho. 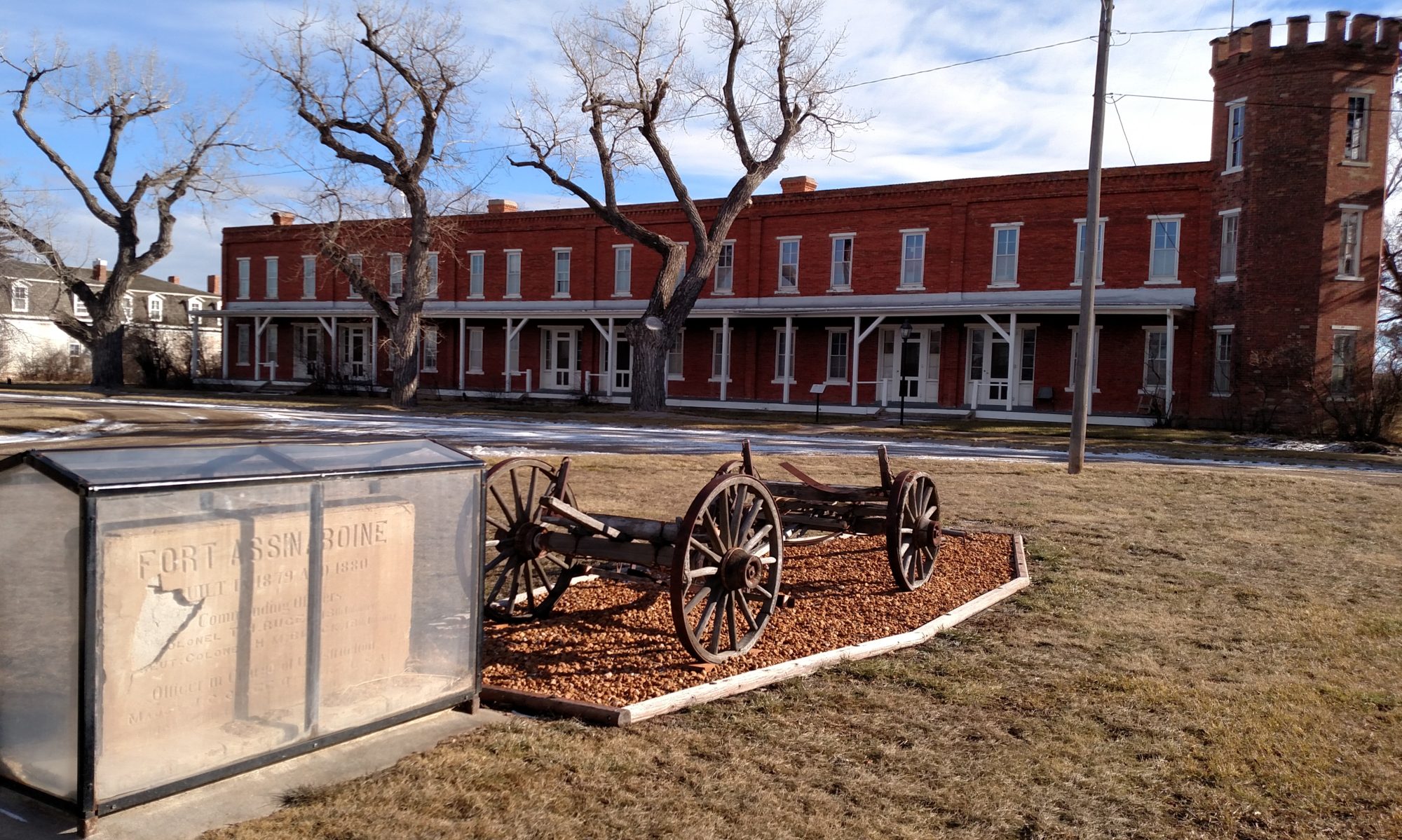 The largest military post in Montana was constructed in 1879 and remained active until 1911 when the Frontier Wars were coming to an end. Fort Assinniboine was named for the Native Americans, also known as the Nakota, who lived in the great plains at the time. Today, the Fort Assinniboine Preservation Association manages the fort, which can be toured by appointment during the summer season.

Fort Churchill was built in 1861 to protect early western settlers and guard the Pony Express. The fort also became an important supply depot for the Union Army during the Civil War, and was abandoned shortly after the war ended. The original grounds of Fort Churchill are now surrounded by Fort Churchill State Historic Park. Visitors can walk the trails on site to study the ruins, which have been archeologically preserved in “a state of arrested decay.” 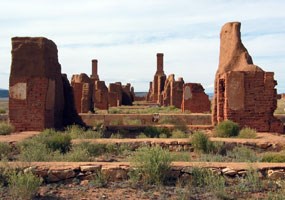 The first Fort Union, an adobe-style frontier fort and the largest military fort in the region, was established in 1851. In 1861, with the Confederate Army advancing towards the west, a second Fort Union was built to better withstand potential siege. Soldiers from the fort helped defeat Confederates in the Battle of Glorieta Pass, sending them retreating to Texas. A third Fort Union was built shortly afterward as a central supply hub for all other New Mexico posts and remained active until 1891. Self-guided tours, interpretive programs, group tours, and lectures are all available today at the Fort Union National Monument. 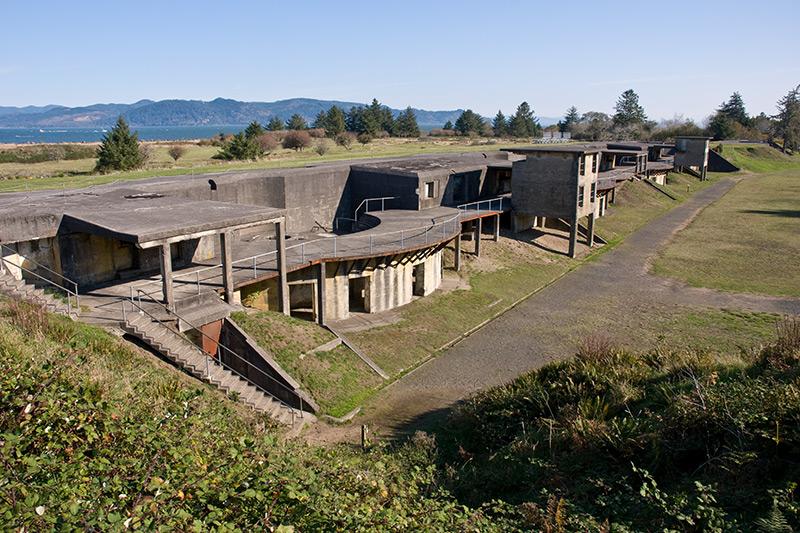 Built on the mouth of the Columbia River, Fort Stevens was intended to defend the Columbia from British attack during the Pig War of 1859. The fort remained active for nearly 90 years. It was the first military installment in the contiguous United States to come under fire during WWII and was decommissioned shortly after the war ended. Much of Fort Stevens is preserved within Fort Stevens State Park. Oregon visitors can explore the remaining artillery gun batteries, walk the military museum, and even take underground tours of the former WWII command center. 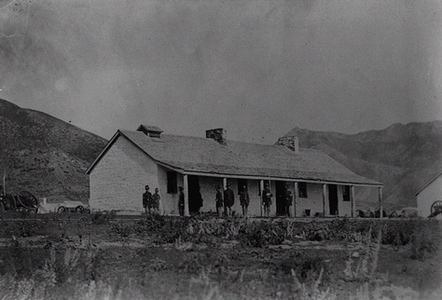 Fort Douglas was first established during the Civil War. Its goal was to protect the mail route and telegraph lines along the Central Overland Route as Confederate troops moved west. It was used as an internment camp during WWI and an Army airfield during World War II. Today, a portion of the original fort is used by the Army Reserve and includes the Fort Douglas Military Museum, which is open to the public. 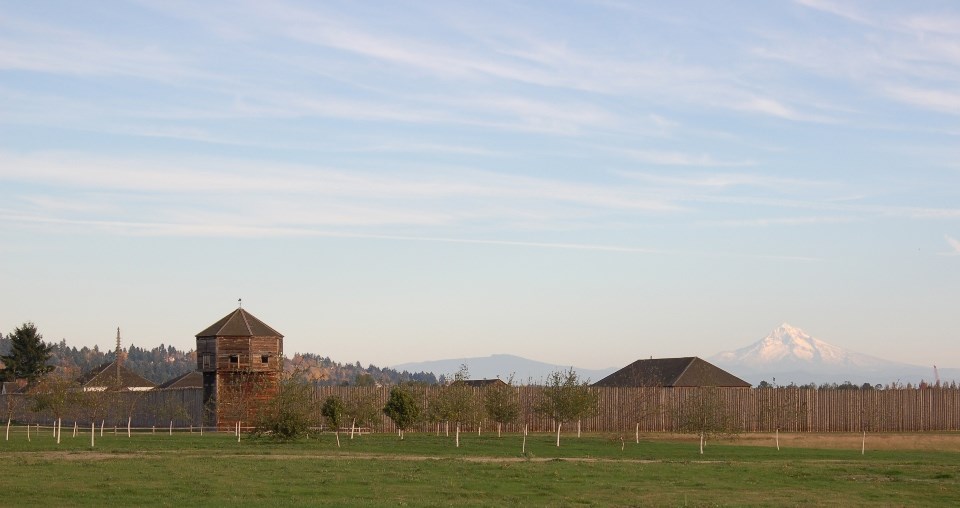 Fort Vancouver has been partially reconstructed by the National Park Service // Photo via nps.gov

Unique compared to others on our list of forts in the U.S., Fort Vancouver never saw military action. The London-based Hudson’s Bay Company established Fort Vancouver in 1825. It served as the headquarters of the company’s fur trade and the central hub of their U.S. operations for years. It was also one of the last supply-stops settlers could make along the Oregon Trail before settling on their new land. The majority of the original structures remain in good condition with some having undergone minor reconstruction. The fort is a part of Fort Vancouver National Historic Site, and both guided and self-guided tours are available year-round.

This U.S. Army fort was built as an outpost in 1866. It was situated along the Bozeman Trail during the height of the Frontier Wars and served to protect prospective miners traveling north. Fort Phil Kearny played an important role in Red Cloud’s War, the Fetterman Fight and the Wagonbox Fight. It was active until the Union Pacific Railroad rendered the Bozeman Trail obsolete and was abandoned in 1868. While the fort itself was later burned by a group of Cheyenne, the State Historic Site includes a visitor’s center with exhibits, self-guided tours of the archeological remains and battlefields, and a replica of the former officer’s quarters.

This post is the first of our four-part historic U.S. Forts Series. Check back for more famous forts to visit in the Midwest, Northeast, South.