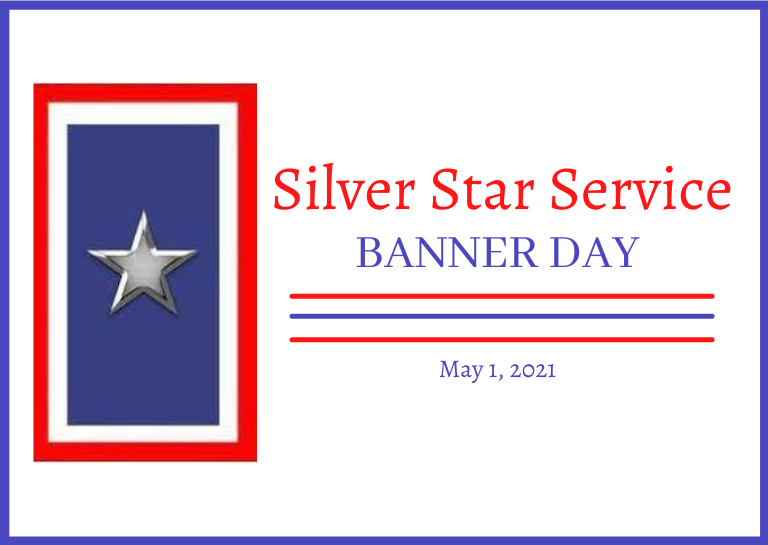 It was during World War I that the tradition of displaying Service Banners came about. Families with sons or daughters serving in war zones hung banners with one blue star to recognize each deployed child. If a soldier represented by that blue star lost his life, the star was covered with gold thread. If that soldier was injured or became ill while serving, the star was covered with silver thread.

Over the years, the silver star designation was seen less and less, and eventually faded out of use altogether. Therefore, when the use of Service Banners was officially added to United States Code decades later, Silver Star Banners were not included.

Silver Star Families of America (SSFOA) was established in 2005 with a mission to bring back formal recognition of any soldier who was wounded, injured, or contracted a serious illness while serving in a war zone. Per U.S. Code, the organization was not permitted to alter existing Blue Star Service Banners with silver thread as had been done in the past. So, they created a brand-new banner to recognize our country’s wounded and ill service members.

Today, thanks to the hard work and dedication of SSFOA, thousands of wounded and ill veterans have been awarded a Silver Star Service Banner.

While banners are reserved for combat veterans, Silver Star Service Flags may be purchased and flown by anyone who wishes to show support for the sacrifices made by those who have fought for our freedom.

Note: Silver Star Service Banners are not related to the Silver Star Medal awarded by the Military for gallantry in action.

13 Historic U.S. Forts to Visit in the West Scroll to top
Follow a manual added link