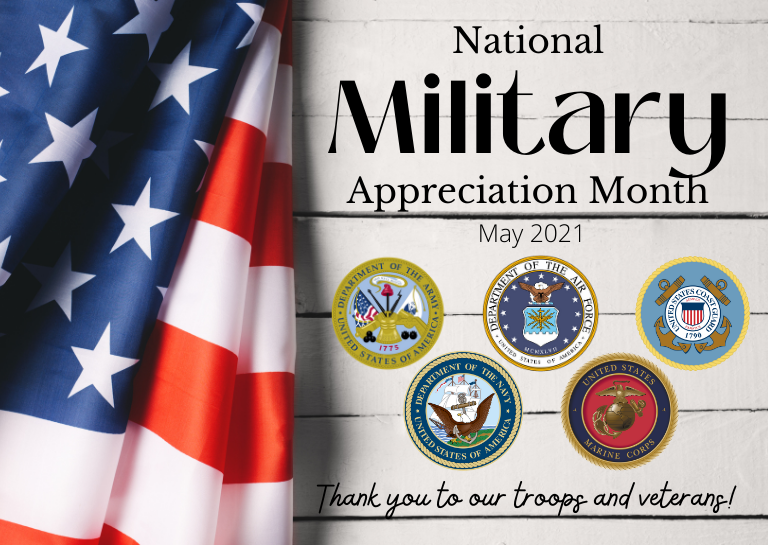 When Is National Military Appreciation Month?

In 1999, John McCain introduced a bill that would formally designate the month of May as Military Appreciation Month. Soon after, Congress agreed and passed the resolution.

What is Military Appreciation Month?

The purpose of designating an entire month as National Military Appreciation Month is to remind Americans of the service and sacrifice put forth by all of our military service members, both past and present. Throughout the month, military branches and installments across the globe are encouraged to establish or engage in community events that highlight military efforts as well as thank civilians for their support.

May seemed the perfect month to officially honor our service men and women because so many established military appreciation days already take place between May 1st and May 31st. Here’s a look at each day of recognition during this year’s Military Appreciation Month.

Loyalty Day was signed into law in 1958, although it had been unofficially celebrated for more than thirty years prior. On this day, the President of the United States delivers an official proclamation to recognize our nation’s heroes, and several states hold Loyalty Day celebration events.

This week is dedicated to honoring our Nation’s public servants on the federal, state, county, and local levels.

Military spouses are often overlooked for the sacrifices they make in the name of our country. To honor these incredible men and women, President Regan declared the Friday prior to Mother’s Day each year to be Military Spouse Appreciation day.

This day commemorates the official surrender of Germany to the Allies in 1945, signifying the end of WWII.

This day shows appreciation of the tremendous sacrifice forced upon 20,000+ American children whose parent lost his or her life while serving our country.

United States Armed Forces Day has been celebrated on the third Saturday in May, ever year since 1950.

The only Federal holiday on our list, and perhaps the most recognized day of military remembrance, Memorial Day is celebrated on the last Monday in May. Memorial Day creates the perfect end to National Military Appreciation Month 2021, falling on the last day of the month, May 31st.

Here are a few simple ways to honor our service members during National Military Appreciation Month.