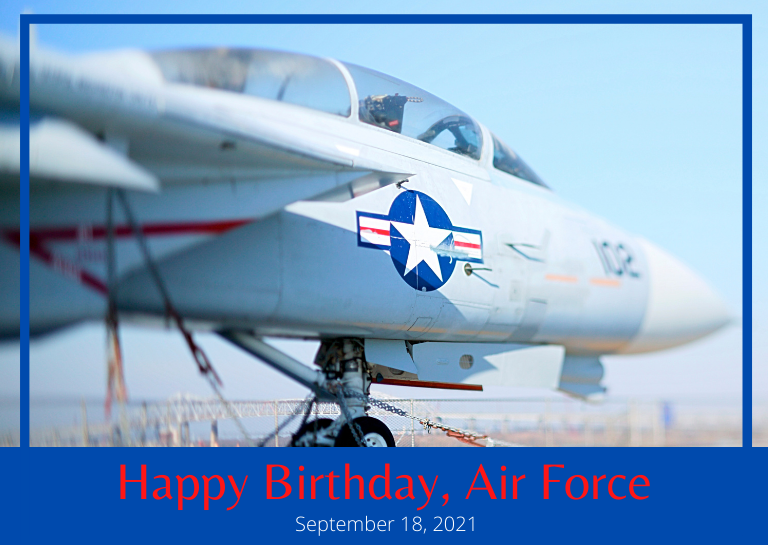 The United States Air Force (USAF) is the second youngest branch of our armed forces, and – as its name implies – members of the air force are responsible for providing aerial warfare to the U.S. military. Along with conducting independent operations, the USAF also provides air support for land and naval forces in the field. On September 18th of this year, the Air Force technically turns 74 years old, but it’s been around for decades longer.

When is the U.S. Air Force Birthday?

Those who want to know what year the Air Force was founded are in for a bit of a history lesson. The USAF, as we know it today, was established on September 18, 1947, but there are actually six predecessor organizations to the Air Force. The official birth of an air arm to the U.S. military occurred in 1907 with the establishment of The Aeronautical Division of the U.S. Army Signal Corps. Read on to learn why we are celebrating the 74th, not the 114th, Air Force Birthday in 2021.

August 1, 1907: Enter the Aeronautical Division of the U.S. Signal Corps

The Aeronautical Division procured the first military aircraft just two years after its creation. In the meantime, they were busy establishing aviation schools and inventing a rating system for pilot qualifications. In 1913 the first deployment of an American aviation unit took place, when the 1st Aero Squadron headed to the U.S./Mexico border to help prevent potential security breaches.

Earlier legislation to make aviation service independent from the Signal Corps was not approved, and the Aeronautical Division was placed under the umbrella of the Aviation Section of the Corps. This shift was a turbulent one, as the Aeronautical Division pilots – who were all quite young and relatively new to the armed forces – often butted heads with the Aviation Section leaders – who were more established officers. Because of this struggle, the Aviation Section wasn’t nearly as prepared to take on the task of Army support during WWI as the military would have liked. What followed was a chaotic, unsuccessful attempt at expanding and reorganizing the ariel warfare component of our military.

This name only lasted four days and was used during a reorganization of the Aviation Section of the War Department. The Division of Aeronautics existed as the sole Army aviation agency for this brief period during WWI.

To combat some of the turmoil that arose when the Aeronautical Division was absorbed by the Aviation section of the Signal Corps, the U.S. Army Air Services was created as an independent, yet temporary branch of the War Department during WWI. While this Air Service only existed on a year-to-year basis, it was the first independently organized areal service branch. During WWI, the Air Service responsibilities fell under two agencies – the Division of Military Aeronautics and the Bureau of Aircraft Production. The existence of dual authorities created additional difficulty within the organization, and it would be several years until a fully autonomous air force would exist.

After WWI, a divide continued to form between two opposing viewpoints. There were those who believed the aviation arm of the military should continue as an auxiliary branch with the sole purpose of supporting ground forces. And then there were those who felt aircraft was significantly underutilized as a means of protecting our nation, and thus deserved its own official “branch” of the military. In the end, the traditionalists won, at least for a little longer. During the years between the world wars, the Army Air Corp worked to promote the concept of aviation force as an autonomous service, but remained largely focused on supporting ground services.

With participation in WWII becoming a certainty, and in an effort to provide the air arm of the Army with greater autonomy, a strengthened structure, and additional command authority, the U.S. Army Air Forces was established. This was the single most radical reorganization of the aviation branch to date. As the War raged on, the strength and importance of the Army Air Force grew. By the end of WWII, the need for a fully independent aerial service branch was clear to all.

The USAF was created with the passing of the National Security Act of 1947. Finally, the aviation division of our armed forces was viewed not as an auxiliary branch, but as an entity unto itself. The Air Force was now able to conduct independent missions which equipped our Armed Forces with the ability to provide prompt, sustained offensive and defensive air operations.

While a military air component has been part of our armed forces for over 100 years, the struggle for autonomy and independence, as well as recognition for its contributions to American warfare make it easy to understand why September 18, 1947 is such an important date to the Air Force. So, Military Connection celebrates with our nation’s Airmen and Air Force Officers, today. Happy 74th birthday to the U.S. Air Force!

Honoring the 9/11 20th Anniversary – Nine Ways to Remember and Refle...