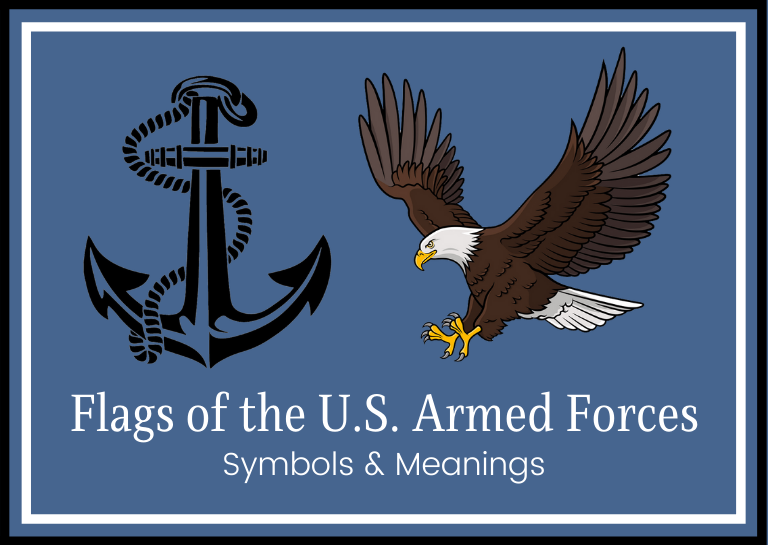 Military flags are a beautiful reminder of the rich, dynamic history of the United States, and a unique flag has been thoughtfully designed for every branch of the armed forces. Symbols representing strength, power, and the trials and tribulations of the men and women who fight to protect our country are included in each flag, which are proudly displayed on ships, bases, camps, academies, and during special occasions.

There are several armed forces symbols present in most military flags. Intended to represent a unique aspect of military culture, these U.S. military symbols are relatively universal, and each makes up some portion of the individual military branch “logos.”

Intended to represent strength and power, he has always been a part of the military. The American bald eagle symbolizes something so ingrained in American culture that it would be quite noticeable if he weren’t featured on our military flags. 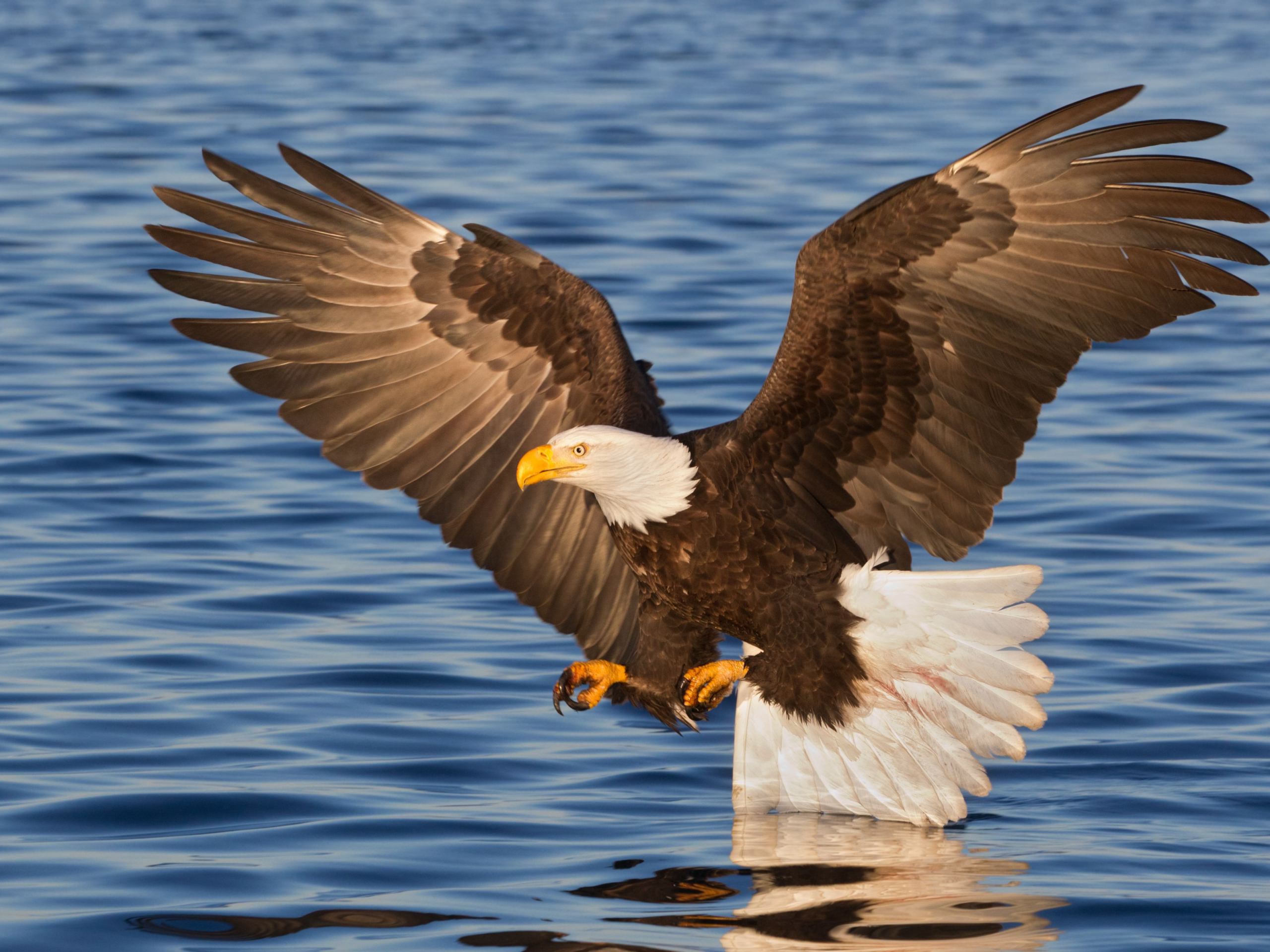 A chain-wrapped anchor, or fouled anchor, represents the trials and tribulations of each military branch. Symbolizing, unity, service, and navigation, you’ll find the fouled anchor on quite a few military flags.

While not U.S. military symbols, per se, specific words were carefully selected for use on Military flags to identify each branch and what it stands for.

Military Flags and Their Meanings 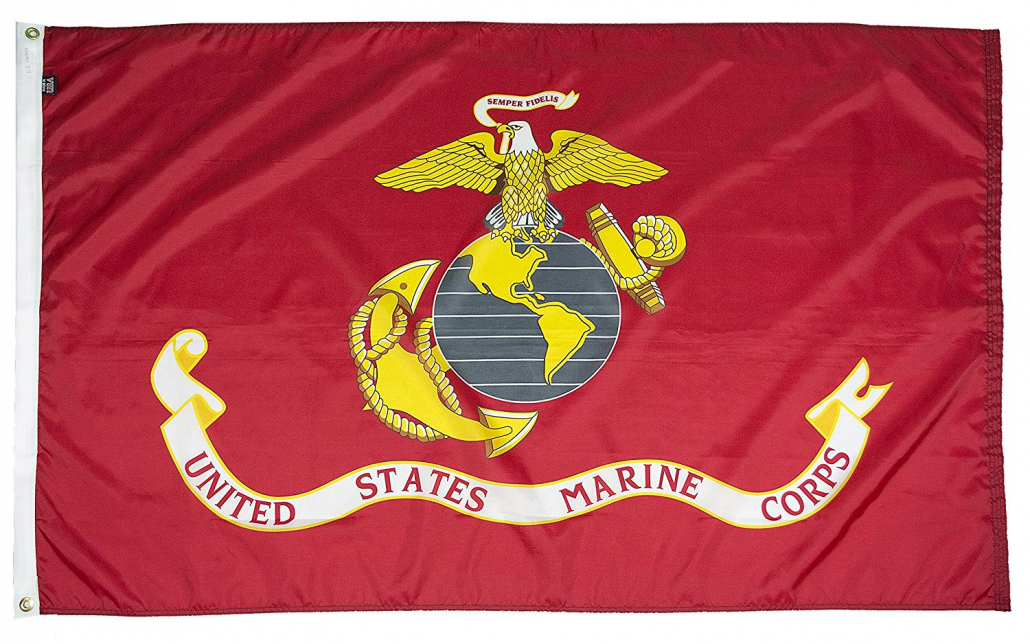 The Marine Corps flag is scarlet in color with the Marine Corps emblem, and features a globe intersected by a fouled anchor in grey and gold. Atop the globe sits the American bald eagle with the Latin inscription “Semper Fidelis” on a ribbon extending from his beak. Below the image is a scroll with the words United States Marine Corps.

It is believed that components of the emblem were all armed forces symbols or ornaments worn by the Continental Marines as early as 1776. Combined, they represent pride, honor, integrity, bravery, and tradition. The current design of the Marine Corps flag has been in use since 1939. 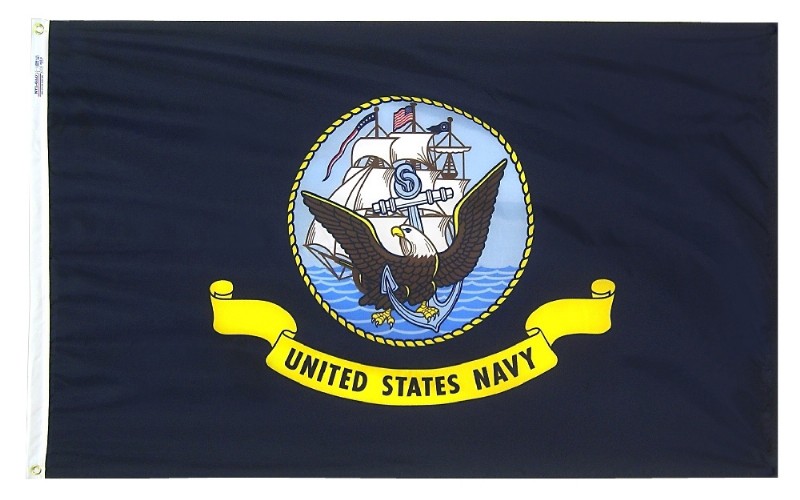 The seal of the U.S. Navy symbolizes support of the shore as well as amphibious strike capabilities. It depicts a bald eagle with outspread wings atop an anchor protecting a ship at sea and is at the center of the Navy Flag.

This seal has been in use since 1951 and was integrated into the Navy flag in 1953. The seal is surrounded by a circular rope and below is a yellow scroll bearing the words United States Navy. Interestingly, the official Navy Flag is not to fly from any vessels. It is only flown during parades, ceremonies, and official public gatherings with Naval personnel present. 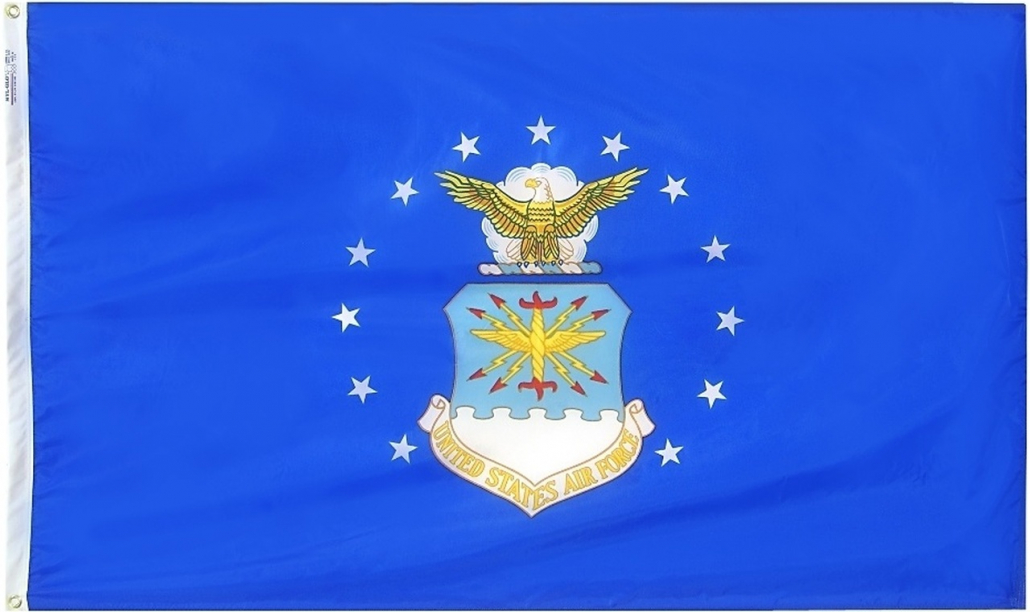 At the center of the ultramarine blue flag is the Air Force crest, a bald eagle with wings spread, perched above the Air Force coat of arms, and surrounded by 13 white stars representing the 13 original colonies. The outstretched wings of the eagle span three of these stars to indicate the three branches of the National Defense at the time of creation: Army, Navy, and Air Force.

Behind the eagle is a white cloud said to represent the beginnings of a new world. The Eagle as well as the thunderbolt image on the coat of arms are Air Force symbols meaning to convey the air striking power of the United States. The words United States Air Force are written in yellow upon a white scroll at the bottom of the shield.

The Air Force Flag was first adopted in 1951 by President Truman and has remained unchanged since. 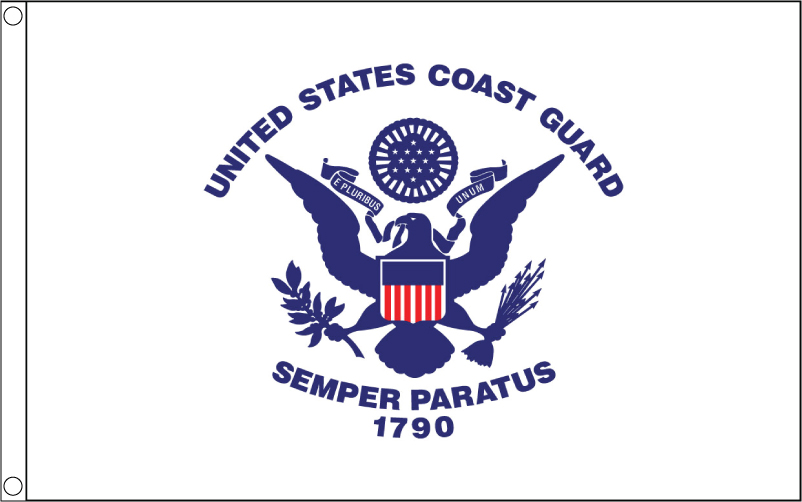 Symbols for the Coast Guard all seem to have very obscure origin stories, so it’s difficult to determine exactly what the artwork on the Coast Guard flag is intended to convey.

Nevertheless, the flag of the U.S. Coast Guard includes the Great Seal of the United States: a navy-blue eagle holding wheat in one talon and a bunch of arrows in the other. Centered on the eagle is a navy-blue chief set above vertical red and white stripes.

A blue and white emblem featuring 13 stars is centered above the eagle’s head. In an arc over the entire emblem are the words United States Coast Guard, and the words Semper Paratus arc below. The flag also includes 1790, the year the Revenue Cutter Service (which would eventually become the U.S. Coast Guard) was established. 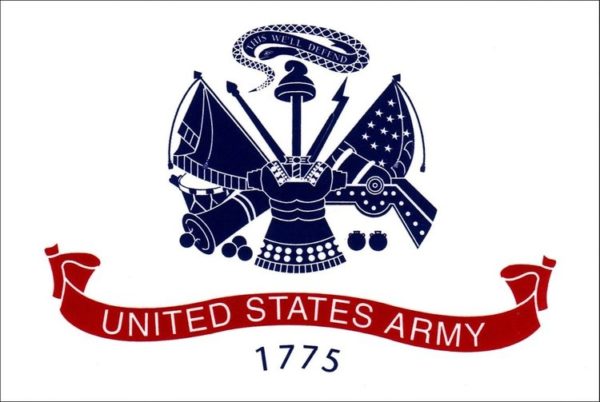 The United States Army flag features much more intricate imagery than other branches of the armed forces. Symbols include the original War Office seal in ultramarine blue on a white background. Above the seal the Army motto, This We’ll Defend, is written on a scroll and protected by a snake. In the center of the emblem is a Roman cuirass, a U.S. Army symbol of strength and its mission to protect America. A cannon and mortar flank the cuirass to represent the force of the Army, and a Phrygian cap atop an unsheathed sword stands for liberty.

Below the emblem is a red scroll with the words United States Army written in white. At the bottom of the flag, in blue, is 1775 – the year in which our Army was officially established.

Interestingly, despite being the oldest branch of the military, official U.S. Army flag history is a bit of a mystery. The Army was the last branch to have a singular, official flag, which was only introduced in 1956. It has remained unchanged since.