Military Blog
You are here: Home1 / WWII Vet Continues to Defend the Flag 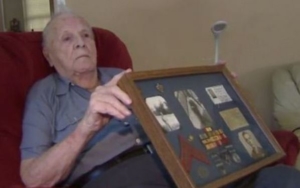