Military Blog
You are here: Home / Army Claims the Title of Fattest Branch of the Military 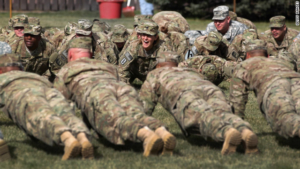 The U.S. military is growing larger, but not in a good way.

Today’s military is fatter than ever, and according to Pentagon statistics, the Army is the heaviest, with 10 per cent of soldiers considered clinically overweight.

Weighing in at a close second is the Air Force, and the Navy is in third place.

The Marine Corps appears to have the fittest service members. With that said, some 4,800 Marines appear to be heavier than regulations allow.

The Pentagon’s data is based on body mass index, or BMI. Individuals with a BMI greater than 25 are considered clinically obese.

Weight issues have broad implications for the health and readiness of today’s force.

But military officials caution against placing too much emphasis on BMI scores, which simply evaluate an individual’s height and weight to flag those who might have unhealthy levels of body fat. The measurement is often criticized as a blunt tool that wrongly identifies bodybuilders with heavy muscle mass as being fat while missing flabby and unfit people with lanky body types.

The rate of overweight troops is far less than the civilian population, with approximately 70 percent of U.S. adults having a BMI above 25.

The Army emphasizes  that fitness is an important part of its culture.

“The physical readiness of our soldiers is imperative to unit readiness and mission accomplishment,” said spokesman Paul Prince. “The Army has strict physical fitness requirements and has multiple, coordinated initiatives in place designed to improve the readiness and health of the total Army.”

An Air Force spokesman said,  “Our Air Force is healthy and fit to fight, with approximately 96 percent of airmen passing the test in the past two years, which is up significantly from the 2010 pass rate of 87.6 percent.”

And a Navy spokesman highlighted changes made to its annual fitness test last year that make it more difficult for sailors to fail the body composition assessment portion of the Navy’s physical fitness assessment.

But failure will come at a higher cost, as two failures within three years can result in a sailor being kicked out of the Navy, according to the service’s new rules.