You are here: Home1 / Writer’s Circle2 / Pin-Ups For Vets Founder Documents Her Respect For Veterans on YouTube 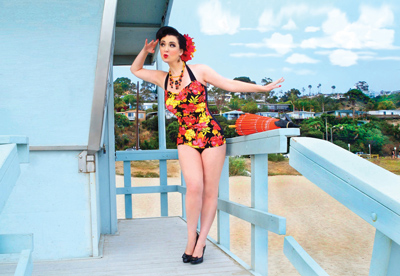 http://www.pinupsforvets.com/inthenews.html ) of her trips to VA Hospitals that have been covered by local news stations such as Fox News, with the hope that others will be encouraged to volunteer at their local VA Hospitals.

During this month of May, to celebrate the service and sacrifice of our Troops and Veterans, Elise has re-posted her You Tube video where she uses American Sign Language to sign the words to Lee Greenwood\\’s popular song, “Proud To Be An American” ( http://youtu.be/WG_QJQ4R1UI ). Elise says, “When people see me sign this song on the You Tube video, I hope that the song\\’s lyrics will remind them to never forget those who gave us our freedom and rights. Military Appreciation Month is a great time to express our gratitude to our Nation\\’s Heroes.”

Gina Elise is granddaughter of a WWII Army Veteran and Founder of the award-winning non-profit organization, Pin-Ups For Vets. In 2006, two years after graduating from UCLA, she created a unique non-profit organization that produces nostalgic WWII-style calendars which raise money for VA and Military hospitals across the US. To date, Pin-Ups For Vets has donated $50,000 to help expand cognitive, physical and occupational rehabilitation programs at VA and Military hospitals across the US. Ms. Elise also travels across the nation and the globe, appearing as a WWII pin-up girl (red lips, liberty rolls in her hair, 1940s classic dress) to distribute these donated calendars to our ill and injured Veterans and Wounded Warriors as a way to boost morale while they are hospitalized. Gina Elise has been dubbed the “Betty Grable for a New Generation” and has been named the “Calendar Angel” by deployed troops.

She is currently in the middle of a 50-state VA and Military hospital tour to boost morale and show appreciation to our Nation\\’s heroes. She has completed visits to 35 VA and Military hospitals across the US. Many hospitalized Veterans comment that Ms. Elise\\’s surprise visits, dressed as a 1940\\’s pin-up girl, provide such a morale boost that many have proclaimed “This is the best thing that has happened to me all day!” and “Am I dreaming?” Because of her activism, Ms. Elise was selected to be on Oprah\\’s final “Favorite Things” episode which aired in November of 2010, where she was presented with a brand new 2012 VW Beatle. Her poster was featured in a scene with Bruce Willis in the 2010 summer blockbuster “Red,” and her calendar was also featured on the Discovery Channel\\’s “Desert Car Kings.” There have been 9 American flags flown over military bases in Iraq & Afghanistan in honor of her project. She has been presented with the “Outstanding Young Californian Award” by the California Jaycees Foundation and the Junior Chamber of Commerce, and has been selected as “Volunteer of the Year” by the LA Business Journal\\’s Women Making a Difference Awards. She has also been honored by the Daily Points of Light Foundation in Washington D.C., and was also selected as a Finalist in the “Best Young Entrepreneur” category by the Stevie Awards. Her image has been painted on a military base in Iraq as a morale booster for the troops. Returning Veterans who have been inspired by her project have painted her image on their motorcycles. In January of 2011, Ms. Elise partnered with another non-profit organization, “Cooking With the Troops” and made a visit to Landstuhl Regional Medical Center in Germany to do a calendar signing and prepare a gourmet meal for our Wounded Warriors being treated there.