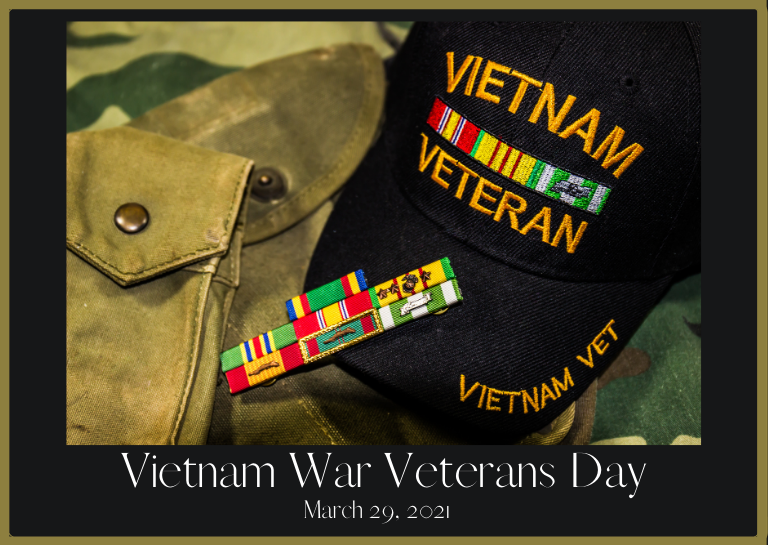 On March 29th, 1973 the final round of U.S. troops was withdrawn from Vietnam. Forty-eight years later, we are celebrating the fourth anniversary of National Vietnam War Veterans Day, which was established by the Vietnam War Veteran Recognition Act of 2017.

Nearly nine million United States soldiers served during the Vietnam War Era, and today we lose close to 3,900 Vietnam Vets each week. There are several organizations which have made it their mission to honor and preserve the legacy of those who served, while educating each generation about the Vietnam War and its impact.

The VVMF assists in the upkeep and care of The Wall, supports the collection and curation of all tribute items left at The Wall, hosts ceremonies to commemorate those who served and sacrificed, and distributes educational material to teach students about the lasting impact of the war in Vietnam.

In 2009 The VVMF embarked on a mission to connect every name on The Wall with a face and a story. The Wall of Faces, is nearly complete, with a few photos missing from only three states and one territory.

Vietnam Veterans of America chapters can be found throughout the country. The organization also produces a bi-monthly publication titled The Veteran, which is available in print for VVA members and online for anyone who is interested, at no cost.

The United States of America Vietnam War Commemoration was launched in 2012 to commemorate the 50th anniversary of significant U.S. involvement in the Vietnam War. Since then, the organization has striven to present all 6.2 million U.S. veterans of the Vietnam War with a Vietnam Veteran Lapel Pin as “a lasting memento of the Nation’s thanks.” The Commemoration will continue until 2025.

Due to the COVID-19 pandemic, many of the usual events held to honor National Vietnam War Veterans Day have been cancelled, postponed, or gone virtual. There are still several ways to show your support for our Vietnam Vets.

Another way of honoring the Vietnam Veteran in your life is to explore the possibilities of receiving Aid & Attendance benefits for which your Veteran might be eligible. For more information on Aid & Attendance and whether or not you or someone you know qualifies, visit Veterans Home Care’s VetAssist Eligibility Calculator.

On Vietnam War Veterans Day 2021 Military Connection honors the sacrifices, both past and present, of all of our Vietnam Vets, fallen soldiers, and their families. Thank you for your service.

Was Bea Arthur in the Marines?