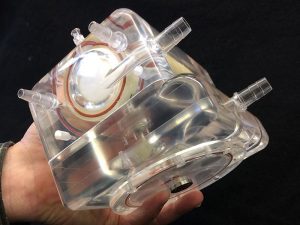 Evidence of 3D printing used to make a difference in the lives of veterans is evident in customized prosthetic attachments and covers. But now, taking it even a step further, scientists at the VA Ann Arbor Health Care System in Michigan are developing a 3D printed artificial lung that could help treat veterans affected by lung disease.

Chronic obstructive pulmonary disease (COPD) is one of the most prevalent and expensive illnesses currently affecting U.S. veterans, with 16% of the veteran population affected, many through exposure to burn pits, chemicals, diesel exhaust and sand during their military service.

Potkay and his team are focused on patients who have a buildup of CO2 in their blood, which often applies to veterans with end-stage COPD. This often leads to sudden cardiac death, so any excess CO2 needs to be removed from the lungs so it doesn’t get to this point.

The goal behind the VA research is to create the first truly wearable artificial lung that’s compatible with living tissue and can provide both short- and long-term respiratory support, and microfluidic artificial lungs also use far less blood than current commercial devices do. According to Dr. Potkay, this is the first time that high-resolution polymer 3D printing has been used to fabricate microfluidic lungs with 3D blood flow networks.

“We hope that these microfluidic flow paths and biocompatible coatings will be more compatible with living tissue, thereby reducing the body’s immune response and increasing the lifetime of the device,” says Potkay. “The flexibility in design afforded by 3D printing gives us more freedom and thus the ease to build artificial lungs with a small size and pressure drops that are compatible for operation with the body’s natural pressures.”

The 3D printed lung could also be used as a temporary solution for people with other lung diseases, like acute respiratory distress syndrome.

Dr. Potkay is not sure yet how far away we are from implanting 3D printed lungs. But hopefully, relief will be available for those who need it sooner rather than later.

Defining “Combat” in PoliticsKetamine Being Considered By VA Emergency Treatment for Patients At High Suicide... Scroll to top
Follow a manual added link