You are here: Home1 / Veterans Court 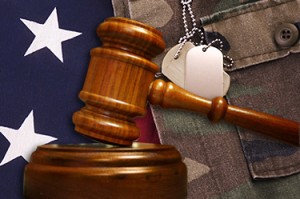 The first Veterans Court was started in Buffalo, New York in 2008. Since then, more and more state and county legal systems are seeing an increasing amount of Veterans mustering through their courtrooms.

Over a decade spent fighting two wars has produced a large population of combat Veterans who fought for their country in Iraq and Afghanistan. These Veterans survived their deployments, only to come home to rampant unemployment and underemployment. Many of them have been ill-equipped to succeed on the home front. Discouraged, and often times dealing with varying degrees of post-traumatic stress, many Veterans have turned to substance abuse. Abusing drugs and alcohol is often the cause of many Veteran arrests.

Judge Poulson, like many other judges across the U.S., is convinced that Veterans who find themselves in trouble with the law need help of a different sort, something other than a jail ***or*** prison sentence. Other county judges, after seeing similar scenarios in cases concerning scores of Veterans, want to find a way to help Veterans and their communities by offering alternative solutions. That is why Veteran courts are springing up all over the nation.

Woodbury County’s Veterans Court is expected to utilize a system that matches each offender with a Veteran mentor. Poulson envisions mentorship pairs that share similar military experiences. Mentors are not intended to be counselors for the offenders, but rather someone to whom they can go to for advice and guidance.

Judge Poulson hopes that the Woodbury County Veterans Court will be operational by January 1, 2015.