You are here: Home1 / US National Sled Hockey Team 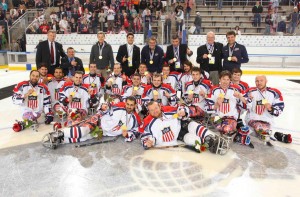 Sledge hockey, also known as sled hockey, is a very underrated sport. A variation of ice hockey, sled hockey is specifically designed for those with a physical disability. Invented in Sweden in the early 1960’s, sled hockey has become one of the most popular sports in the Paralympic Games.

Professional hockey teams usually dedicate time before and during each game to honor a member of the Armed Forces, so it should be no surprise that the U.S. National Sled Hockey Team includes four Marine Corps Veterans, and they’re all pretty good.

So good, in fact, that on Sunday, May 3rd, the team claimed gold at the 2015 IPC Ice Sledge Hockey World Championships in Buffalo, New York. With a decisive 3-0 victory over the Canadian team, the U.S. team swept the series. In fact, all four games were shutouts.

Although the game was scoreless through the first two periods of play, the game was physical and the U.S. team lead the ‘shots on goal statistics’, outshooting Canada 13-3. Entering into the final period, at exactly 2 minutes and 58 seconds, Declan Farmer guided the puck past Canada’s goaltender, low on his short side, breaking the scoreless tie, and giving the Americans the advantage. Farmer was credited the goal, with the assist going to Brody Roybal. But, it didn’t end there.

Less than five minutes later, Adam Page found Dan McCoy waiting at the front of the net, where a shot fired went straight over the goaltender, giving the Americans a 2-0 lead. Then, with :22 remaining, Canada pulled their goaltender for an extra man advantage, a commonly used tactic sport wide. Sometimes it works, and other times, like this game, Josh Pauls made the game 3-0 with an empty-netter.

Although Luke McDermott, Josh Misiewicz, Paul Shaus, and Josh Sweeny didn’t score, their efforts as a team helped the Americans edge out the Canadians for the victory.

Two of them, team captain Sweeney and Schaus, are Team USA mainstays — with Paralympic gold medals to show for their efforts — while Misiewicz and McDermott are both rookies.

Still, in the heat of the battle, where pucks and sleds are flying with abandon, rank takes a back seat.

“In the Marines, a lot of times you don’t have to say stuff,” McDermott said. “You look at the guys who have been there for a while and how they act. Every Marine from the bottom up is supposed to lead by example, whether you have a leadership title or not.”

All of them are bilateral leg amputees, each having been severely injured by land mines while serving in Afghanistan, and all of them playing forward, with Sweeney, Schaus and McDermott comprising U.S. coach Jeff Sauer’s “All Marine Line.”

“I think we’re a little harder on each other,” said Sweeney, who played high school hockey in Arizona, “just because we’re used to talking to each other like that. We’re not afraid to get into each other. That’s just how we communicate.

If you would like to learn more about this sport and the amazing ice warriors who play, visit http://to.pbs.org/1N7WagF.

All of us at MilitaryConnection.com would like to congratulate the entire team on their hard fought and well-deserved victory, and a special Semper Fi to the Marines of Team USA!