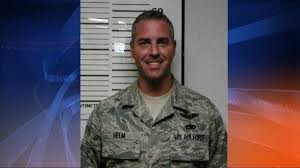 A U.S. Air Force Technical Sgt. who disappeared while awaiting court martial at Scott Air Force Base was arrested more than 1,800 miles away in Reno, Nevada.

The fugitive airman allegedly had a “bucket list” of things to do before he appeared for his court-martial.

The Nevada Highway Patrol stopped Davis Lawrence Helm, 35, because his motorcycle’s tail light was out, and then discovered he was wanted for being a military fugitive and deserter.

Helm was able to cross a few things off his list prior to his arrest. He told troopers he had just left Las Vegas, where he went skydiving and drove a McLaren sports car on a racetrack,

Helm is accused of sexually assaulting a girl and women in series of alleged incidents between Jan. 1, 2012, and May 18, 2014, at or near LaFollette, Tennessee; Gatlinburg, Tennessee; Scott Air Force Base; and Dayton, Ohio, according to a charge sheet provided to Air Force Times.

Helm is accused of sexually assaulting a girl who is younger than 16 years old, the charge sheet says. In one incident, he allegedly physically overpowered her.

The Air Force first alerted the public to Helm’s disappearance on June 4. At the time, Helm allegedly told friends he was traveling to eastern Tennessee to visit family.

Helm has served as the noncommissioned officer in charge of mission management for the 375th Aeromedical Evacuation Squadron since Aug. 1, according to the Air Force Personnel Center. He has been assigned to Scott since July 15, 2013.