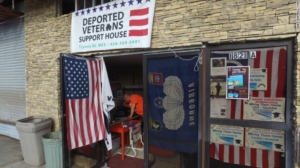 The California legislature is considering AB 386, a bill introduced by State Assemblywoman Lorena Gonzalez Fletcher that would create a legal assistance fund for veterans who have been deported. The bill has been passed by the Assembly without any dissenting votes and now goes to the Senate.

Veterans who run afoul of the law can be deported after serving time in jail or prison because they’re not citizens.

“Immigrants who serve and fight for our country earn the right to become citizens. That’s common sense, it’s a powerful way to recruit bright and talented young men and women, and it’s federal law. But instead of keeping our promises, we’ve kicked these veterans out of the country they fought for,” Gonzalez Fletcher said. “They’ve earned the right to return to this country as Americans, and make restitution for their mistakes as Americans.”

“People make mistakes,” said Gonzalez Fletcher, noting that “a lot” of those mistakes are caused by post-traumatic stress disorder.

“When someone is willing to die for this country and give us everything that they have … we just thought it was time to figure out a way to get them back home,” she said.

In order to qualify for legal aid under the bill, a veteran would have to provide evidence of current or prior California residency, which could be graduating from a state high school, having a spouse or child currently living in California, or being stationed in the state for military training.

The Deported Veterans Support House, founded by Army veteran Hector Barajas in Tijuana, estimates that it has been in contact with over 100 veterans who have been deported.

Earlier this month, Gov. Brown pardoned three military veterans, including Barajas, who were deported, removing one obstacle to their return.

Assemblyman Rocky Chávez (R-Oceanside) supports the bill. As the co-chair of the Assembly’s Veterans Affairs Committee, the former Marine has tended to vote against legislation that would assist immigrants who are in the U.S. illegally.

But Chávez feels it’s a different matter when it comes to legal residents who served alongside citizens.

“These individuals were in the foxhole fighting together,” said Chávez. “Both of them were suffering the same horrors of combat together.”