You are here: Home1 / SO1 Brett Allen Marihugh 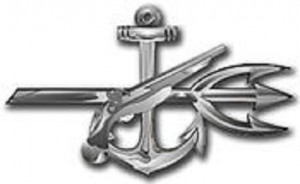 The Navy’s Special Warfare community is in mourning after two of their members died in an accident while training.

On April 24, 2015, two members of Naval Special Warfare Group 2 were found unresponsive in a swimming pool at Joint Expeditionary Base Little Creek in Virginia. Both men were Navy SEALs conducting physical training. The two SEALs were discovered by other service members assigned to the Combat Swimmer Training Facility and were rushed to Sentara Leigh Hospital.

Special Warfare Operator (SO, the Navy rate for SEALS) First Class Petty Officer (E-6) Seth Cody Lewis passed away shortly after arriving at the hospital. SO1 Lewis was 32 years old, and originally from Queens, New York. Lewis served in the Marine Corps from 2001-2005 before enlisting into the Navy in 2006 to become a member of the SEALs. SO1 Lewis earned the Bronze Star with Combat Valor, the Purple Heart, the US Navy/Marine Corps Commendation Medal with Valor, the US Navy/Marine Corps Achievement Medal with Valor, and other campaign and service medals. He is survived by his wife, Kristy

SO1 Brett Allen Marihugh was in critical condition for two days until he, too, passed away on April 26. Marihugh was 34, from Livonia, Michigan. Like Lewis, Marihugh had previously served in the Marine Corps, from 1999 to 2003. Marihugh also enlisted in the Navy in 2006. So1 Marihugh’s awards include the Bronze Star, Joint Service Achievement Medal, Combat Action Ribbon and the Navy/Marine Corps Commendation Medal with Combat V in support of the global war on terrorism. Between enlistments, Marihugh worked for Oakland County Sheriff’s Department. He is survived by his mother, Sandra Murray; father, Michael Marihugh; stepmother Zona, and sisters Sheradyn and Meghan.

Both deaths are still under investigation, but at this point, are being called accidental drownings.

Everyone who signs their enlistment contract, raises their right hand, and promises to serve their country know that there are sacrifices and risks. But this never makes it any easier when our service members– our sons, daughters, parents, siblings, nieces, nephews, cousins, friends and neighbors die.  We at MilitaryConnection.com would like to send our deepest condolences to the families, comrades and friends of SO1 Lewis and SO1 Marihugh. Fair winds and following seas…