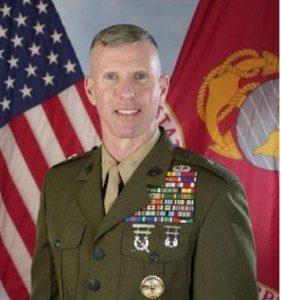 Although not yet officially announced, it appears that Defense Secretary Ash Carter has selected Brig. Gen. Eric M. Smith, to be his senior military adviser.

Smith, currently the commander of U.S. Marine Corps Forces South, is a one-star Marine Corps general who will be replacing Army Lt. Gen. Ronald A. Lewis, the Army three-star who was abruptly fired last month over allegations of an “improper relationship.”

The senior military adviser to the secretary of state is a highly influential military officer, the Pentagon chief’s top military aide, who provides the Defense Department’s civilian leader with key military advice on all matters of policy and strategy.

Carter previously worked with Smith when Carter was the Defense Department’s deputy secretary of defense in 2013 and Smith was senior military adviser to that position.

Brigadier General Smith is from Plano, Texas and entered the Marine Corps in 1987 through the NROTC program at Texas A&M University. He was assigned to 2nd Battalion, 3rd Marines and participated in Operations Desert Shield / Desert Storm. Following a tour as an Officer Selection Officer, he attended the Amphibious Warfare School and then reported to 2nd Battalion, 2nd Marines for duty as Commanding Officer of Weapons and E Companies. During this tour he participated in Operation Assured Response in Monrovia, Liberia. After a tour as a Marine Officer Instructor at Texas A&M University, he attended the United States Army Command and General Staff Course. From 2001- 2003, he served as the Naval Section Chief at the U.S. Military Group in Caracas, Venezuela.

From 2003 until 2006, he served in the First Marine Division as the Division Operations Officer; Executive Officer of Regimental Combat Team 1; Commanding Officer of 1st Battalion, 5th Marines; and Assistant Chief of Staff G3. During this time he completed two deployments to Iraq in support of Operation Iraqi Freedom. Subsequent assignments included Senior Aide to the Commandant of the Marine Corps, and Director of the Fires and Maneuver Integration Division at the Marine Corps Combat Development Command. From 2009 until 2012 service included tours in the 2nd Marine Division as the Assistant Chief of Staff G3 and Commanding Officer of 8th Marine Regiment; completing a one year deployment to Afghanistan in support of Operation Enduring Freedom. In June of 2012 he reported for duty as the Director of Capability Development, and in May of 2013 he was assigned as the Senior Military Assistant to the Deputy Secretary of Defense. He assumed duties as Commander, U.S. Marine Corps Forces, South on June 29, 2015.