You are here: Home1 / Second Battalion 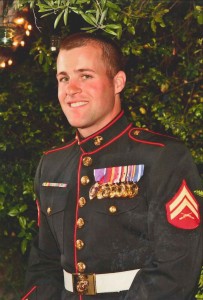 The deaths started a few months after the Marines returned from the war in Afghanistan.

In 2008, the Second Battalion, Seventh Marine Regiment deployed to Helmand Province. The battalion regularly ran low on water and ammunition, all the while under fire, almost daily. During eight months of combat, the unit killed hundreds of enemy fighters and suffered more casualties than any other Marine battalion.

In the post-deployment years that have followed, the unit has been plagued by suicides. Out of the 1,200 Marines who deployed together, at least 13 have committed suicide. Veterans of the unit, tightly connected through social media, would sometimes learn of the deaths nearly as soon as they happened.

The surviving veterans of the battalion have their own survival strategy; they depend on one another. Using free software and social media, they have created a quick-response system that allows them to track, monitor and intervene with some of their most troubled comrades.

Their system has made a few saves, but there are still failures.

The Marines of the 2/7, calling themselves “the Forgotten Battalion,” were spread out in sandbag outposts, hours from reinforcements, and often outnumbered. There was no dedicated air support, few mine-sweeping trucks.

They see a tie between combat and their suicide problem. Not only were all of the men who committed suicide young infantrymen those who had a hard time with the experience of killing and loss, but also had experienced at least one devastatingly traumatic moment.

The one death that really shook the battalion was that of Clay Hunt.

Cpl. Clay Hunt had been a sniper in the battalion. After he got out of the Marine Corps in 2009, he sought treatment from Veterans Affairs for depression and PTSD.

He began speaking openly about his problems and lobbying for better care for veterans. In 2010, he was featured in a public service message urging veterans to seek support from their comrades.

Hunt was desperately trying to get care at the V.A.

According to his mother, Susan Selke, Hunt encountered long delays and inconsistent treatment. In March, 2011, the 28 year old veteran shot and killed himself.

“When he died, all the guys, we couldn’t understand it,” said Danny Kwan of San Gabriel, CA, who served two tours with Hunt. “He had done exactly what he had been fighting against.”