You are here: Home1 / Joseph Dunford 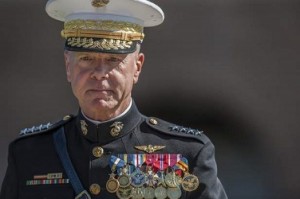 At a ceremony held at Marine Barracks Washington on October 17, 2014,  Gen. Joseph Dunford became the 36th Commandant of the U.S. Marine Corps.

The Commandant of the Marine Corps (CMC) is the Corps’ member of the Joint Chiefs of Staff. The CMC is traditionally the senior ranking officer in the branch, and reports directly to the Secretary of the U.S. Department of the Navy (SECNAV). The CMC is responsible for advising the President, Secretary of Defense, SECNAV, as well as the National Security Council and Homeland Security Council on all matters pertaining to the U.S.M.C.

The Office of the CMC is responsible for the overall performance of the Corps, including readiness, training, discipline, organization and  implementation of policies and programs. Like all other joint chiefs, the position of CMC is administrative only, and offers no operational command authority over U.S.M.C. forces. Each CMC is nominated by the president, and must be confirmed by the U.S. Senate. Terms for all joint chiefs are four years.

Joe Dunford is originally from Boston, MA, and he earned his commission in the U.S.M.C. in 1977. The new CMC held many positions along the way to becoming a four-star general. In the 2003 invasion of Iraq, Dunford commanded RCT-5, and earned the nickname “Fighting Joe.”  From 2010 to 2012, Gen. Dunford served as Assistant Commandant of the Marine Corps, succeeding Gen. Jim Amos, who he would later succeed as CMC. Dunford also served as commander of U.S. and Allied forces in Afghanistan from February, 2013, until his appointment to his new job.

Gen. Dunford was appointed to be the Commandant of the Marine Corps on June 5, 2014 by President Obama, and his nomination was confirmed by the Senate on July 23.

“My focus, in the coming years, will be to take care of our Marines and their families, and to ensure that our Corps remains the expeditionary force in readiness that our nation has come to expect,” Dunford said. He continues, “God bless you all, Semper Fidelis, and for those still in uniform, continue to march.”