You are here: Home1 / CAMVETS 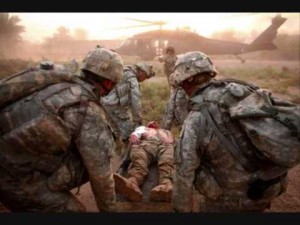 Combat medics are responsible for providing first aid and frontline trauma care on the battlefield. They are also responsible for providing continuing medical care in the absence of a readily available physician, including care for disease and battle injury. Combat medics are normally co-located with the combat troops they serve, often times putting them in the most dangerous areas. But what happens when they transition back to civilian life?

Joe Carney has treated bullet wounds, shrapnel wound, and severed limbs. He saved lives with bombs and gunfire surrounding him. And sometimes, his emergency room was nothing more than a patch of dirt in the desert. But when he left the Army, none of that mattered, and he was forced to reset back to square one. His well-honed skills translated to next to nothing in the civilian world.

It’s a common story with medics and corpsmen, who have long had difficulty finding civilian medical work that matches their training.

In 2012, the VA created a program that offers former medics a path to civilian healthcare careers through their roles as Intermediate Care Technicians (ICTs). There is now a pilot program called CAMVETS, that prepares ICTs to become physician assistants while still working their day jobs.

Navy Lt. Cmdr. (Ret.) David Lash, the director of the Corpsman and Medic Vocation Education and Training Program and a civilian physician assistant, said that interest in the program from Veterans has been overwhelming, and he wants to take it national. He also hopes to be able to tailor the program to Veterans interested in using the ICT job as a stepping stone to other medical careers.

There are currently 45 ICTs working across 15 VA hospitals, and the program is set to grow to about 270 slots. Pay for technicians can range from $31,000 to $52,000, depending on experience and location.