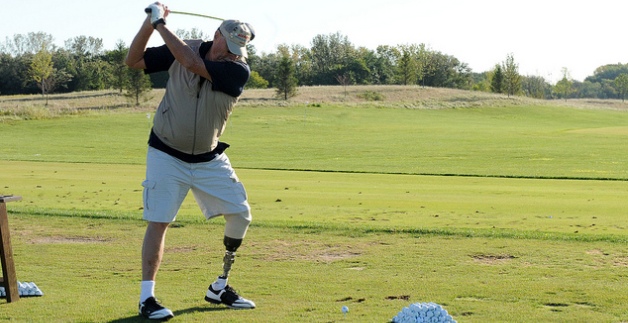 I am the product of a recreational golfer. While my father’s love of the game never truly encouraged me to enthusiastically strut onto the greens, I do own a full set of clubs and found myself marketing for a golf packager after grad school. As a result, I know my way around the industry a bit.

A few weeks ago, I received an email in response to one of our “send us your military stories” requests. One of our MilitaryConnection.com readers had taken the time to tell me about a friend of his who had played with a wounded war veteran in Florida. Below is an excerpt of his email to me:

“On Monday, a friend played the Disney Lake Buena Vista course. As usual the starters matched him with three other players. After a few holes they began to get to know each other a bit. This is the rest of what he reports…

We had a nice round and as we became a bit more familiar I asked him about the brand new set of Ping woods and irons he was playing. Some looked like they had never been hit. His response was simple. He said that this round was the first full round he had played with these clubs. Later in the round he told me the following.

Naturally, given my general interest in past history with golf, I was gripped by the tale of my previous profession colliding with my current position. I was thrilled to confirm the contents of that email. Sure enough – Ping had given wounded war veterans their own set of golf clubs along with lessons. Unfortunately, most of the details were from 2011. The most current notation was from 2015, still over three years ago, nothing more current. The lack of current information led me to explore further. Why golf? Why wounded veterans? What is the benefit? The first stop was Ping, which has this posted on their website:

“In addition to our rebate program, we continue to reach out to our troops in several other ways, including providing clubs to military personnel in various war zones around the world. We’re always honored by the numerous letters of appreciation we receive thanking us for helping take their minds off their situations. If you’re an Active, Active Reserve or Retiree of the United States Armed Forces, we hope you’ll participate in the PING Military Mail-In Rebate Program.”

In that little quote was a key answer to my questions – taking their minds off of their situations. My father spent his Saturdays on the links to keep his mind off of the rigors and pressures of investment banking on Wall Street. While his career was completely different, the need was the same: an outlet for stress relief.

The Wounded Warrior Project led me to PGA HOPE. PGA HOPE, a joint effort of the PGA and the Department of Veterans Affairs. The program provides a clinic, introductory in nature and a day in duration, at local VA hospitals, service organizations and warrior transition units. After the clinic, interested veterans are paired up with local professionals and begin a 6-8 week program, complete with equipment – adaptive if needed.

At the end of their program, Veterans are given a graduation ceremony – complete with a handful of golf-related benefits to help them along with their newfound hobby. The PGA HOPE program is provided at absolutely no cost for all participants. It is completely funded by PGA Professionals and local courses often donate their time and resources to help make this program successful.

Not all of our warrior’s wounds are visible. While there is often a story to be told behind a prosthetic or missing limb, the invisible scars are often more difficult to diagnose, treat and talk about.

The Best of the Army’s Best