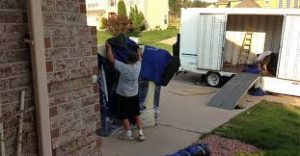 Every year thousands of military service members and their families pack up and move on military orders. All of their valuables and household goods are packed up by contracted strangers, loaded onto a truck and driven across country. In a perfect world, everything would arrive at its destination, in the same condition it was in when it left. But a Change.org petition to “Hold Military Moving Companies Accountable,” started by a frustrated military family member, has over 100,000 signatures, a good indication that this is far from reality.

The story behind the petition is easy enough to figure out. With $2.3 billion spent on moving services, the Department of Defense might just be the single largest moving services customer in the world.

Many military families on the move have experienced hardships because of unexpected delays in pickup or delivery of their household goods. In late July, U.S. Transportation Command officials said about 10 percent of military members who had moved at that point had experienced delivery delays. There have been complaints about the quality of work, too, which has resulted in loss and damage for some families.

“Military families are tired of how things with the current moving system are being handled,” wrote the military spouse who runs the Military Spouse Chronicles Facebook page, in initiating the petition

Moving is a stressful activity under the best of circumstances. Officials at U.S. Transportation Command have urged families to reach out to their household goods/transportation offices to learn about their options for assistance, including reimbursement for expenses caused by delays in delivery or pickup.

Among the suggested solutions from Military Spouse Chronicles is to have move coordinators and quality assurance inspectors properly trained in being a mediator between the military family and the moving company and its crews. Another solution, long proposed by a number of advocates in the military community, is to have less frequent moves.

Navy Researchers Making Progress on a Vaccine for Malaria