Military Blog
You are here: Home1 / Navy Researchers Making Progress on a Vaccine for Malaria 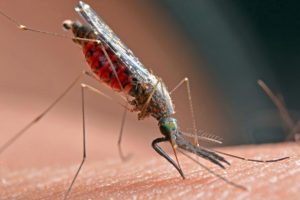 Navy Researchers Making Progress on a Vaccine for Malaria

Navy medical researchers are making progress on a vaccine for malaria, the number one disease that affects deployed troops.

During the breakout session called “What’s New in Infectious Disease Research in the Tropics,” Epstein gave an update on NMRC’s work with PfSPZ Vaccine, a whole organism vaccine comprised of aseptic, purified, radiation-attenuated, non-replicating, cryopreserved sporozoites. Sporozoites (SPZ) are one of the stages of the malaria parasite, which find their way to the liver after inoculation.

According to Epstein, the parasites induce a protective immune response without making copies of themselves. In other words, the weakened parasites do not replicate or get into the bloodstream, and thus do not lead to infection or disease.

Malaria can cause vomiting, fatigue, fever and headaches. In the most severe cases, Malaria can be fatal. Left untreated, there can also be recurrences months and years later.

No effective vaccine has ever been developed, but Epstein said that research on a vaccine using a purified form of one of the early stages of the malaria parasite has been encouraging.

“In all trials, the vaccine has been demonstrated to have a very good safety and tolerability profile and has also been easy to administer,” Epstein said. “Our focus now is to enhance the efficacy and practical use of the vaccine.”