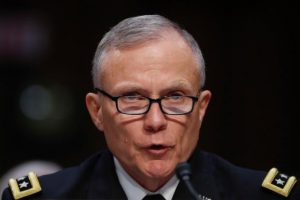 “My core mission is to make sure that the secretary of defense is never surprised,” said Ashley.

Ashley became the 21st Director of the Defense Intelligence Agency on October 3, 2017. He formerly served as the Army Deputy Chief of Staff, G-2, where he was the senior advisor to the Secretary of the Army and Army Chief of Staff for all aspects of intelligence, counterintelligence and security.

“AI and machine learning will be a huge enhancement” to tradecraft and other skills defense analysts use to avoid blind spots,” he said.

Using algorithms to sort through massive amounts of information can take some of the burden off defense analysts, but it doesn’t come without challenges, Ashley said.

“We look very closely at the technology development. Obviously, there’s some breakout things — we watch the AI side of the house, the hypersonics, counter-space, [and] what they’re doing with regard to subs, if you’re following the maritime piece of that as well,” he said. “They’re in the trials for their first carrier. They got an old one from the Russians; now they’re building their own.”

“When an analyst sits in front of a senior leader, they always say, ‘Based on reporting, based on sources, based on what I have seen I have a moderate [degree of confidence]’ or if you see a national assessment that says ‘I have a high-degree of confidence,’ it goes back to sourcing and analytic tradecraft,” he said.

DIA will have to test these algorithms “to be able to prove that it can in fact come back with a high-degree of confidence that the analysis that it’s doing is correct,” Ashley added.

Ashley wants to ensure that the Machine-assisted Analytic Rapid-repository System, or MARS, is at initial operating capability before he leaves office in two years. MARS will take advantage of modern technologies in storage, cloud computing and machine learning to allow analysts to interact with data and information in a more dynamic fashion, rather than static.