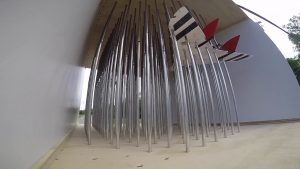 The Army is looking to integrate more robot technologies, from 3-armed super-soldiers to tiny drones that support squad-level surveillance. Recently, a new drone-retrieval system was introduced that could make it easier for Army units to collect their drones after a mission.

The Talon, a device made by Target Arm, sits on the back of a moving vehicle and is able to catch drones of all sizes. The prototype was presented at an industry day at the Maneuver Center of Excellence (MCoE) at Fort Benning, Georgia.

Talon is a very “simple design, applicable to any vehicle, wheeled or tracked. That’s very innovative in my judgment,” said Sando.

“I was like, ‘Hey, that is simple, yet elegant,'” he said. “The ability to launch and recover aircraft from a moving platform really helps our ground formations on a battlefield, where we know they have to move quickly. Anytime you stop, you become a target.”

While there were no demonstrations at the industry day event that was held in late August, many of the companies brought white papers to showcase new technologies that might meet the needs of the service’s new Robotics and Autonomous Systems (RAS) Initial Capabilities Document, said Col. Thomas Nelson, director of Robotics Requirements at Benning.

Many of the industry day attendees will take part in experiments scheduled for November and December in the United Kingdom, said Lt. Col. Nick Serle, commanding officer of the U.K. Infantry Trials and Development Unit.

“That really ties into the great partnership that we have between [Benning’s] Maneuver Battle Lab over here and the work that we do back in the U.K.,” Serle said.