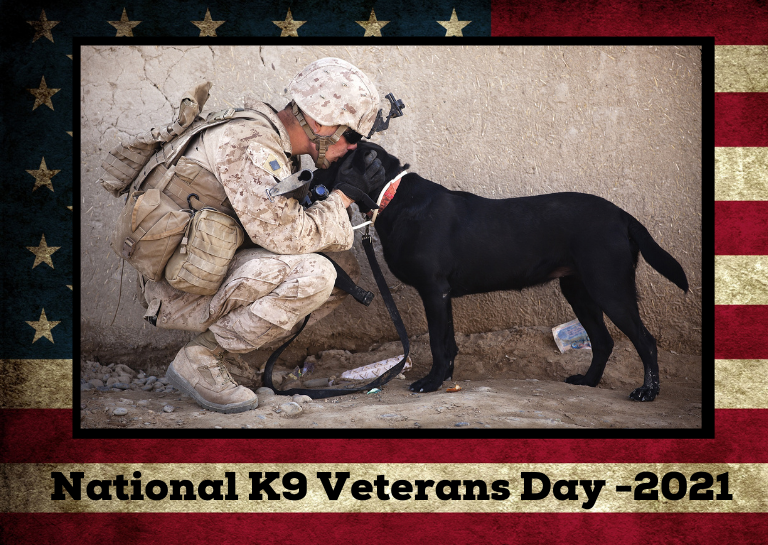 The special bond that so often develops between a dog and his human makes it unsurprising that dogs have been by the side of our military men and women, not just upon returning from service, but during service, as well. In fact, dogs have been used in combat since at least 600 B.C. K9 military dogs started as front line workers, heading into enemy formations ahead of the human forces to create chaos and tear down the opposition’s soldiers. From there, their roles in combat evolved along with technology and warfare tactics.

When Is National K9 Veterans Day?

While military dogs had worked alongside humans for years, it was on March 13, 1942, that the U.S. Military officially created the K9 Corps, which trains dogs for military service. This is why National K9 Veterans Day, intended to honor the loyalty and sacrifices of U.S. military working dogs, is celebrated on March 13th every year.

Dogs really came on the scene as unofficial military service members during World War I. Up to this point, K9s had been used mostly as morale boosting mascots, with a few instances of dogs acting as prison guards, sentries, and small game hunters.

One of the first notable military war dogs was a Bull Terrier mix named Stubby who, by mere chance, became a part of the 102nd Infantry Division before they left Connecticut to fight in WWI. Stubby wandered onto the encampment during stateside training and befriended the soldiers, who later smuggled him aboard the S.S. Minnesota as they prepared to ship out to France in 1917.

While overseas the soldiers learned that Stubby could detect enemy gas, bark out warnings, and help locate wounded soldiers on the battlefield. Stubby stayed with the unit for the duration of its deployment, was made a lifetime member of the American Legion upon his return, and served as the Georgetown Hoya in the early 20’s.

K9 Roles in the Military Today

Dogs’ small size, relative to human soldiers, as well as their excellent sense of smell have proven valuable in combat over and over again. Today, several organizations, such as Dogs for Defense,  exist for the purpose of training dogs to work alongside human soldiers in combat.

Detection dogs are trained to seek a very specific scent – usually a type of drug, explosive, or other living being. Today, K9 military dogs tend to focus on locating explosive devices. They can scent out everything from homemade explosives, to mines, to IEDs. Some detection dogs can even understand hand signals, allowing them to work much further from their handlers when circumstances require it. K9s’ ability to detect explosive devices has been paramount on the battlefields of Iraq and Afghanistan in recent years.

These dogs exist in the marines only. They serve to track down the specific person who planted or stored those explosive devices found by detection dogs.

Sentry dogs usually work alongside guards on patrol, especially at night, to give warning as strangers approach. Historically, they have guarded areas such as airports, supply dumps, and war plants.

Scout or Patrol dogs do the same job as a sentry, but in silence. These dogs specialize in detecting ambushes, snipers, or other enemy forces within a specific area. They can detect an enemy up to 1,000 feet away, and alert without making a sound.

Because of their superior scent detection and ability to maneuver in quarters significantly smaller than a human can, these dogs are often able to locate injured soldiers much faster than their human counterparts. As such, they have been credited with saving many lives, especially when time is of the essence.

In honor of National K9 Veterans Day, here are a few facts you may not know about dogs in the military.

Shepherds and retrievers are used most often. German Shepherds, Dutch Shepherds and Belgian Malinois are known for being intelligent, incredibly loyal, aggressive, athletic, and easily trainable – making them an ideal military dog. When specialized detection is required, Labrador Retrievers or Chesapeake Bay Retrievers might be brought in for the job, but they are typically considered too “goofy” to take on some of the more serious K9 roles.

There are lots of dogs in service. Today, there are roughly 2500 dogs actively serving, with roughly 600 deployed overseas.

Military life isn’t right for all dogs. While specific breeds are more inclined to possess the qualities needed for life as a military war dog, just like humans, every dog is different. In addition to their breed-specific traits, military dogs have to be highly motivated, willing to attack on command, and able to withstand the stressors that accompany combat. That’s a tall order, which is why nearly 50% of dogs that enter training in U.S. military working dog programs will not graduate.

Military working dogs are quite accurate. Dogs that make it through training are close to 98% accurate with their detection skills.

Most K9 military dogs come from Germany and the Netherlands. The bloodlines of dogs in these regions go back hundreds of years, meaning it’s much more likely that they’ll be well suited for service than the more recent bloodlines found stateside. The military is hoping to increase the number of American-born working dogs, which today, make up about 15% of military K9s.

Here are a few other ways you can recognize National Canine Veterans Day on March 13th.