Military Blog
You are here: Home1 / The National Guard Is Vital 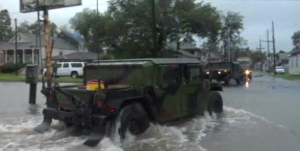 While most of us are aware of the National Guard’s rapid response to civil unrest, hurricanes, wildfires and floods here at home, perhaps the most significant contribution the National Guard has made in recent years is on the battlefield.

After 9/11 and the start of the conflicts in Afghanistan and Iraq, the Department of Defense began relying on the Guard to supplement operations. By 2005, the Army National Guard made up half of all combat brigades in Iraq.

Made up of two main forces, the Air National Guard and the Army National Guard, the Guard is a unique and essential element of the U.S. military.

Founded in 1636 as a citizen force organized to protect families and towns from hostile attacks, today’s National Guard Soldiers hold civilian jobs or attend college while maintaining their military training part time, always ready to defend the American way of life in the event of an emergency.

The Employer Support of the Guard and Reserve (ESGR) is a Department of Defense program established in 1972 to promote cooperation and understanding between Guard and Reserve Component Service members and their civilian employers and to assist in the resolution of conflicts arising from an employee’s military commitment.

I am proud to serve as the Director of Employer Engagement for California’s Employer Support of Guard and Reserve.

Some 2.8 million citizen soldiers have deployed since 9/11. There are over 150 different jobs available in the Guard. Infantry, Air Defense, Medical and Military Police are examples of Guard career fields. Opportunities are also available in intelligence, technology, engineering, aviation, and many other fields.