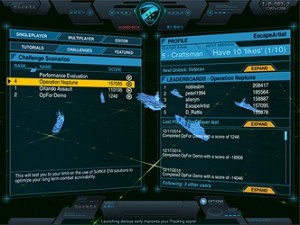 As a Veteran of the U.S. Navy, I can tell you  first-hand that today’s Navy infuses honored traditions with advances in modern technology to maintain dominance as the leading sea power. One of the latest innovations that the Navy is embracing is the use of a video game to help familiarize sailors with the very real threat and consequences of missile attacks to surface warships.

When I was in the Navy, one of my A-school instructors, OS1 Bowles, drove home a very sobering point to me and my class. “How many of you joined the Navy thinking that it was the safest military branch, as far as not getting killed?” OS1 Bowles asked. Most of us raised our hands. “Well,” he continued, “that’s stupid. Navy warfare is no joke. When ships start shooting at each other, people die by the hundreds, even thousands. One shot can kill several hundred sailors, just like that.”

Most of us in the class were just out of basic training, and had yet to set foot aboard our first ship. OS1 told us this, not to scare us into wishing we had joined another branch, but to shape us into being vigilant sailors once we got to the fleet. It worked for me.

Now the Office of Naval Research (ONR) is sponsoring a video game that is supposed to simulate a visual that could, in essence, drive home the same message that OS1 taught me about the very real threats involved with naval warfare. The game, developed at MIT, is called “Strike Group Defender: The Missile Matrix,” and it teaches players how to  react immediately in the event of missile attack.

“Strike Group Defender” is the Navy’s first multi-player, game-based training program, and so far, it has been implemented to train sailors on approximately thirty ships.

The ONR sees playing “Strike Group Defender” as an affordable and realistic way to teach naval personnel about the dangers of missile attacks, as well as how their Integrated Air and Missile Defense (IAMD) systems are intended to work.

Players are exposed to different missile attacks, along with the best ways to counter such assaults. Players are required to choose from several tactical responses in order to defend their ships. The game also familiarizes players with a variety of different types of missiles.

It’s one thing to be taught to press a button or follow a procedure for hypothetical attacks in a training exercise. But it’s another thing to see the results of what can happen when proper procedures are followed and when they are not. This video game does just that. Seeing a ship blow up in the game might provide a better visual of hundreds of sailors dying if they don’t do their job.

While some “Old Salts” may hear about a video game being used for training and scoff at the kinder, gentler ways of the new Navy, many, including myself, will look at the simulation from “Strike Group Defender” and wish for this type of training when we were still in uniform.