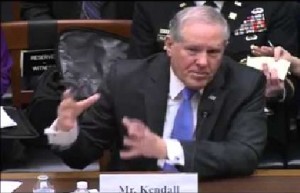 Recently, the Pentagon unveiled part of its strategy for developing its next generation fighter, for both the Navy and the Air Force, as Acquisition Chief Frank Kendall unveiled his strategy to members of the House Armed Services Committee (HASC).

Kendall revealed that at the core of his strategy is what he referred to as the Aerospace Innovation Initiative. The project is also set to include the development of a next-generation engine.

“The intent is to develop prototypes for the next generation of air dominance platforms, X-plane programs, if you will.” Kendall said.

The program and its research will initially be managed by the Defense Advanced Research Projects Agency (DARPA), and will include the Navy and the Air Force as well. Both service branches have already been looking into a next generation fighter that would replace the Navy’s F/A-18s and the Air Force’s F-22s.

There are currently a large number people working as part of the design teams for major programs, including the Long Range Strike Bomber and the Navy’s Unmanned Carrier-Launched Surveillance and Strike program. Kendall stressed to the HASC the need to act on creating this next generation aircraft while current design teams are still intact, stressing that once these design teams are gone or disbanded, there is no getting them back. In a response to a question asked by HASC chairman, Rep. Mac Thornberry, Kendall said the following:

“In very specialized areas, like you mentioned electronic warfare, that’s a very special skill set and you can’t develop somebody who is an expert at that overnight; it takes time. And you get that expertise by working on programs, by developing new cutting-edge things.”

The announcement of the initiative to develop a sixth generation aircraft could also have a major impact on a wide array of new technologies and capabilities, including high speed strike weapons, an advanced new jet engine, unmanned undersea vehicles, high energy laser and rail gun technology.

Newer, more advanced aircraft development will also challenge industry giant Lockheed Martin, who’s F-35 is just now transitioning into its operational phase after long, costly delays and setbacks in the program. The F-35 joint strike fighter was billed as one plane that can address the varying needs of the Navy, Air Force and Marine Corps, while the next generation fighter will most likely be two different planes, for different functions, that will share common parts.

Northrop has already confirmed that it has teams assigned to developing sixth generation aircraft. It can be assumed that Lockheed and Boeing are also working on concepts.