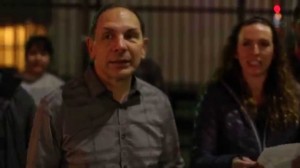 Every year, during the last ten days of January, the annual point-in-time (PIT) count is conducted in cities across the country. PIT counts are planned, coordinated, and carried out locally, in accordance with guidelines established by the U.S. Department of Housing and Urban Development (HUD).

The annual count is an attempt to determine how many people are living on the streets (or in shelters) on any given night in America, and as a census for what demographics are susceptible to becoming homeless. The data gathered from PIT counts is used to gauge the effectiveness of outreach programs, and to see where resources and services are needed. For major urban areas where there are larger homeless populations, these PIT counts are crucial to streamlining and improving the programs that serve the homeless.

VA Secretary Robert McDonald was one of the volunteers who took to the streets of Los Angeles in late January to help with the PIT count.The U.S. Department of Veterans Affairs, which has a goal to end homelessness among Veterans by the end of 2015, has a vested interest in these PIT counts.

“One of the things you learn in the Army is you never leave a buddy behind,” Secretary McDonald told more than 100 PIT count volunteers. “Unfortunately, we’ve left some people behind, and they’re our homeless Veterans. But I’m here to tell you that we, at VA, are totally committed to achieve the goal of ending Veteran homelessness by the end of the year.”

Los Angeles has the largest population of homeless Veterans in the U.S., and has recently been targeted by the VA for major campaigns against Veteran homelessness. Secretary McDonald will dedicate the West Los Angeles VA campus to serving homeless Veterans and Veterans in need. Secretary McDonald will appoint a special assistant to oversee a plan to provide the necessary resources and support.

Secretary McDonald and the VA are committed to combating homelessness among Veterans in Los Angeles, often called the “Homeless Capital of the World.” If the VA can successfully end Veteran Homelessness in L.A., it will prove that it can effectively end homelessness in all cities.