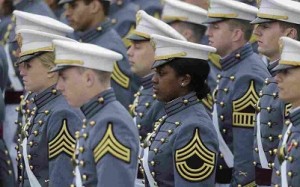 On Tuesday, February 3, 2015, a lawsuit was filed that is intended to force the Pentagon to divulge recruiting information regarding female cadets. Of particular interest are the policies and statistics regarding the recruiting of these cadets into the different service academies.

The plaintiffs in the suit claim that a request filed in November, 2014 under the Freedom of Information Act, concerning the number of women enrolled at the service academies, was not adequately responded to. The request was made by the Service Women’s Action Network and the American Civil Liberties Union, which are pursuing the data as a starting point for what the groups have described as a broader challenge of the admissions policies at the academies.

This most recent complaint was filed at a federal court in Connecticut by Michael Wishnie, an attorney with the Veterans Legal Services Clinic at Yale Law School. According to the complaint, women make up less than one quarter of all students at the U.S. Military Academy at West Point, the U.S. Naval Academy in Annapolis Maryland, and the U.S. Air Force Academy near Colorado Springs, Colorado, combined.

The complaint also says that, even though the three Pentagon-ran academies have enrolled women since 1976, they remain overwhelmingly male as a matter of policy. The complaint claims that West Point has goals for women to make up 14 to 20 percent of its cadets, the Naval Academy caps the number of female midshipmen to under 25 percent, and the Air Force Academy caps their female cadets at 23 percent.

“The underrepresentation of women at the Military Service Academies contrasts starkly with the wide range of opportunities for military leadership open to women after graduation, particularly in light of the Department of Defense’s elimination of gender-based restrictions on women’s service in combat units and specialties,” Wishnie said.

The lawsuit is intended to draw attention to the underrepresentation and the lack of transparency regarding the imbalance of gender equality.

Navy Lt. Cmdr. Nathan Christensen, spokesman for the Pentagon, said that as a matter of policy the Defense Department does not comment on pending litigation.