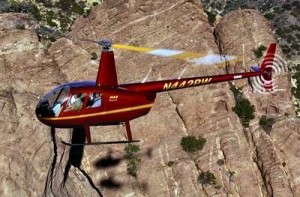 Previously, the Post-9/11 GI Bill had blocked flight training businesses from direct funding because Congress did not want to pay for schools not offering educational degrees. Helicopter schools were struggling financially. But after finding a loophole in the law that allows them to train military veterans completely at government expense, helicopter schools began rapidly expanding. They now collect tens of millions a year in taxpayer dollars.

Under the Post 9/11 GI Bill, the flight schools are allowed to partner with public colleges and universities, many of them community colleges, to offer degrees in aviation. The flight schools work as contractors for the institutions, which keep some portion of the tuition for themselves and pass along the rest to the flight school. The loophole, some critics say, is that there is no cap on what the flight schools can charge for pilot training.

The schools have come under fire from critics who say they are gouging U.S. taxpayers. For two years of training to become a pilot, the government often pays more than $250,000, over twice the amount non-veterans pay at many schools!

With such rich benefits up for grabs, the schools began competing with one another to attract Veterans. Offering costly training on sophisticated helicopters was a powerful recruiting tool.

The colleges oversee the flight programs. They bill the government, collect the money, keep some for tuition and pass the rest to the flight companies.

Officials at the U.S. Department of Veterans Affairs, which administers the GI Bill, were unable to provide the total number of helicopter students across the country or their cost. But as long as the money flows through a public institution, there is no limit on what the VA will pay for flight training.

The main leverage the government has to control program costs is a regulation requiring that non-veterans make up at least 15% of students in VA-funded programs. The intent is to prevent colleges from charging the VA more than non-veterans are willing to pay.

Given their high price, the flight programs have struggled to attract enough non-veterans to satisfy the so-called 85-15 rule.

Sean Heiner, flight program director at Southern Utah University, said the price was “not outrageous” when compared with military spending on pilot training. While there has been substantial growth for some of these companies, it may be short lived. Nearly 7,000 helicopter pilots have left the Army and Navy since 2007, and companies in the private sector in need of pilots may look to those with more hours.

Which begs the question…will there be jobs for these fresh pilots when they graduate?