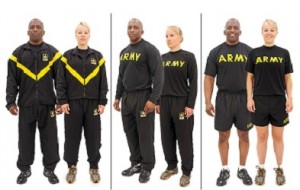 In 2015, the U.S. Army will see a drastic change to their physical training (PT) gear.

A 2012 survey conducted on the Army Knowledge Online website found that approximately 76,000 soldiers found major issues with the current PT uniform, the Improved Physical Fitness Uniform (IPFU). While Army personnel liked the gear’s durability, there were glaring shortcomings with the IPFU that could not be overlooked.

One of the biggest issues was that the shorts for the uniform, while functionally sound when personnel were upright, tended to intrude on soldiers’ modesty when doing regular PT staples, such as sit-ups and leg-lifts. Both men and women complained, with many of them paying out of pocket for often-expensive compression shorts to wear under their IPFU shorts.

Soldiers also complained that the IPFU did not vary enough in sizing to accommodate the different female body types. While many will scoff that PT is not a beauty competition, all can agree that everyone should be able to don PT gear that fits.

In response to feedback from soldiers, the Army came up with the new Army Physical Fitness Uniform (APFU). The new APFU is all black with gold lettering. Improvements to this generation of PT gear include lightweight moisture-wicking fabric that is quick drying, a shorts liner to solve the modesty issue, and multiple sizing options, including more sizes for females. The APFU also did away with reflective materials, addressing stealth issues when working out in a war zone.  PT belts can be used when better visibility is desired.

The APFU consists of  jacket, pants, shorts, and T-shirts,  in both short-sleeve and long-sleeve options. The different APFU items can be mixed and matched. During group PT and PT formations, the platoon sergeants will determine the appropriate combo.

The APFU will be offered in two different options, the Clothing Bag variant, and the Optional APFU. The two APFUs will look the same, but they will be made of different materials. The individual items of the two variants can be mixed and matched and worn together.

The APFU has already begun appearing in stores. The estimated wear-out date for the current IPFU has been estimated at fall, 2017, with mandatory possession of the APFU in 2018.

Military Connection proudly serves those who serve in the Army, Navy, Air Force, Marines, Coast Guard, Guard and Reserve, Veterans and their Families. We are the go to site for Veteran Employment and information on Veteran education. Militaryconnection.com provides Veterans with and Directory of Employers, a Job Board, information on the Post-9/11 GI Bill, and a blog that offers Veterans boundless information. Be sure to visit Militaryconnection.com, the go to site. Military Connection: New Army Workout Gear: By Debbie Gregory