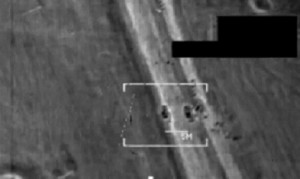 On January 3, 2015, the U.S. and its partner-nation allies conducted six airstrikes against the Islamic State terrorists in Syria, and one airstrike in Iraq, as part of ongoing efforts of Combined Joint Task Force Operation Inherent Resolve.

Operation Inherent Resolve is intended to eliminate the Islamic State terrorist group (also called ISIS and ISIL) and the threat they pose to Iraq, the Middle East, and the world. The destruction of Islamic State targets in Iraq and Syria hinder the terrorist group’s ability to project terror and conduct further operations and expansion.

The six airstrikes in Syria were located near Kobani, in the northern region of the country. The strikes hit three Islamic State fighting positions, two staging areas, four building occupied by the terrorist group, three Islamic State Vehicles and one tactical unit.

The single airstrike in Iraq hit an Islamic State tactical unit near Mosul.

Airstrikes have proven effective at taking out targets in Iraq and Syria, as well as in other parts of the world.

On December 29, 2014, the U.S. conducted an airstrike in Somalia, near the town of Saakow. This airstrike was carried out using an unmanned aircraft (commonly called a drone), much like the September 1, 2014, drone-strike that killed Ahmed Abdi Godane, leader of the Somalian terrorist group al-Shabab.

The day after the attack, the Somalian government announced that the drone strike had killed the head of intelligence and security for al-Shabab, Tahlili Abdishakur. On December 31st, the Pentagon confirmed the action, saying that Abdishakur’s death would impact the terrorist group’s ability to conduct attacks against the Somali government and its people, as well as U.S. allies in the region.

Airstrikes from both manned and unmanned vehicles are effective at combating large and small targets with minimal losses to our forces.

With the formal ending of U.S. combat operations in Afghanistan taking place at the close of 2015, many Americans believe that all of our service members are safe and coming home. But the truth of the matter is that we still have men and women deployed around the world, conducting operations that put them in harm’s way. This includes service members involved with Operation Inherent Resolve, our personnel who are still in Afghanistan, and others stationed, steaming or flying over other parts of the world.

Please continue keep our men and women in uniform and their families in your thoughts and prayers in 2015.