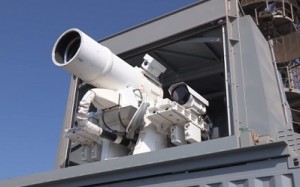 The Navy’s newest weapon passed its field testing, and is fully fitted on one warship, ready for use. Would-be foes of the U.S. Navy might want to heed the song’s warning.

In August, 2014, the U.S.S. Ponce (LPD-15) left its homeport of Norfolk, Virginia on a deployment to the Persian Gulf. The Austin-class Amphibious Transport Dock, a Vietnam War-era ship, was fitted with the latest weaponry, a directed-energy weapon.

The Navy’s Laser Weapon System (LaWS) is a short range ship-defense system, intended to supplement missile and gun-based defense systems. It is guided using radar from the Phalanx CIWS (Close-In Weapons System), which is already equipped on the Ponce. The weapon uses a solid-state infrared laser beam, which can be tuned to low output to warn or cripple the sensors of a target. LaWS can also be tuned to high output to pinpoint and destroy the engine on a small boat, create a small hole in a larger target, or obliterate a small target, such as a drone.

In 2010, Kratos Defense & Security Solutions was awarded an $11 million contract to develop LaWS. In total, the Navy spent around $40 million over the last six years to develop LaWS. This may seem like an extravagant cost for the weapon, but the Navy sees LaWS development and production as an investment in the future.

While not intended to completely replace missile systems, there are several advantages to equipping more warships with the LaWS system. The glaring advantage is the price of projectile. Each firing of LaWS requires only the cost of generating the energetic pulse, estimated at 59 cents per shot. In comparison, the Navy’s Tomahawk missiles cost over $1.5 million per shot. Plus, missiles require millions of dollars in moving, handling and storage costs, including training personnel on how to safely handle each missile. Because the LaWS directs energy, there is no ammunition to store, which is a huge benefit for ships underway.

So far, LaWS has been reported to be performing perfectly. If all goes according to plan, the Navy could begin fitting other ships with LaWS and begin to develop direct energy weapons with longer ranges and more devastating capabilities, perhaps with enough power to sink an enemy warship.

While LaWS is a far cry from the TNT described in the 1906 song, it still stands true with the fighting spirit of the U.S. Navy that “Anchors Aweigh” represents.