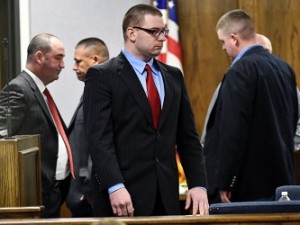 The American public, and in particular, the Veteran community, has watched the murder trial of Marine Veteran Eddie Ray Routh. Charged with the 2013 killing of “American Sniper” Chris Kyle and Veteran advocate Chad Littlefield, Routh’s trial has been playing out in Stephenville, Texas.

Kyle, who many consider to be the U.S. military’s most famous hero of the Global War on Terror, is now a household name because of the film “American Sniper.”  Kyle’s friend, Chad Littlefield, spent much of his free time working with Veterans.

Routh,  also a Veteran who was honorably discharged, claims to have PTSD. While in the Marine Corps, Routh was deployed to Iraq, but apparently was not involved in combat. Those close to Routh claimed that he seemed fine when he came home from Iraq in 2008. But after he returned from Haiti, following participation in the relief efforts from the 2010 earthquake that devastated the Caribbean nation, Routh seemed “changed.”

Routh shot and killed both Kyle and Littlefield at a shooting range, as the two men were attempting to help Routh with his mental state.  Routh’s mother had reached out to request help for her son. While he did not deny the action, Routh pleaded not guilty by reason of insanity.

The most damning evidence against Routh were recorded phone conversations from within the Erath County Jail, with Routh acknowledging that he knew what he was doing when he killed the two men, and that he knew it was wrong.

“It tore my heart out. I guess you live and you learn, you know,” Routh said during a May 31, 2013 recorded conversation.

Routh was sentenced to life in prison without parole.

The slayings were very much a crime of brother against brother. And while most of the American public had reached a guilty verdict punishable to the fullest extent, many in the Veteran community felt that  Routh’s mental state, especially if it was a result of his honorable military service, should be considered.

While the jury felt that he was not suffering from PTSD, there is little doubt that Routh the Veteran is much different from Routh the Marine who served his country.

If a Veteran that you know is in crisis, or is “changed” in an alarming way, you are urged to have them contact the crisis line, or do so on their behalf.