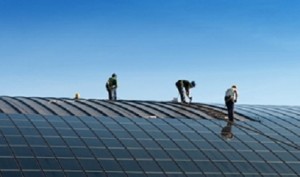 On February 18, 2015, the first class of Marine trainees graduated from the Energy Department’s solar job training pilot program at Camp Pendleton. The program is intended to prepare service members for civilian careers in the solar industry, as part of the Department of Energy’s SunShot Initiative.

Camp Pendleton is one of three military installations that is partnering with the DOE pilot program. The program will train 200 transitioning military service members for careers in solar-related positions, including sales representatives, system inspectors and solar photovoltaic system installers. Service members who graduate from the solar training program will have the ability to size and install solar panels, safely connect electricity to the grid, and interpret and comply with local building codes. The other two participating bases are Naval Station Norfolk in Virginia, and Fort Carson in Colorado.

The solar job training pilot program for transitioning service members is also working in conjunction with the Department of Defense’s SkillBridge initiative. Through the initiative, exiting military personnel can pursue civilian job training, employment skills training, apprenticeships and internships up to 6 months prior to their separation date.

The solar industry is a great fit for transitioning service members looking for civilian careers. Solar companies have a reputation for hiring military Veterans. The industry employs nearly 17,000 Veterans, which make up approximately 10 percent of the 174,000 solar jobs nationwide.

Five of the largest U.S. solar companies have committed to interviewing the military trainees graduating from the solar job training pilot program, a step that will help place qualified trainees in well-paying jobs.