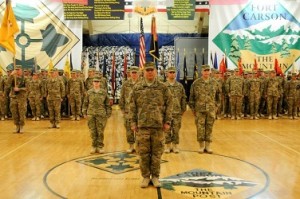 While the world is updated daily as to  the atrocities committed by the Islamic State, members of the U.S. military are on the move to confront that force of evil. The U.S. Army’s 3rd Brigade Combat Team (BCT), 4th Infantry Division out of Fort Carson, Colorado is deploying to Kuwait.

The 3rd BCT is known as the “Iron Brigade.” The unit is Fort Carson’s heaviest force, armed with tanks and Bradley Fighting Vehicles. Many of the soldiers in the Iron Brigade served in one or more of the brigade’s four combat tours in Iraq.

The soldiers of the 3rd BCT have trained for over a year for the Kuwait mission. They practiced and re-learned the armored combat skills last used in the 2003 invasion of Iraq.

The 3rd BCT is deploying just days after President Obama asked Congress to authorize new combat efforts against the Islamic State.  But the president’s proposal isn’t intended to use the Army’s big combat units to fight Islamic State militants.

“Local forces, rather than U.S. military forces, should be deployed to conduct such operations,” the president said in a letter to Congress. “The authorization I propose would provide the flexibility to conduct ground combat operations in other, more limited circumstances, such as rescue operations involving U.S. or coalition personnel or the use of special operations forces to take military action against (Islamic State) leadership.”

Kuwait has housed a U.S. Army brigade since the end of the Iraq war in 2011. Those brigades have worked to train local troops from throughout the Middle East.

A deployment ceremony was held at Fort Carson on February 11th. We wish the men and women of the 3rd BCT a safe and successful deployment, and a safe trip home to their families.