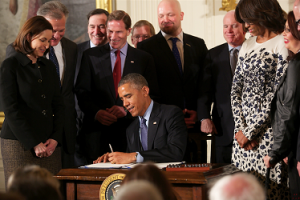 The bill, named after Clay Hunt, a Marine Veteran who committed suicide in 2011, calls for an evaluation of existing U.S. Department of Veterans Affairs (VA) suicide prevention and mental health programs. The bill also improves the reach and efficiency of how these programs are administered to our nation’s military Veterans.

Also included in the legislation is the establishment of a pilot program for community outreach. Part of this outreach program could involve  colleges and universities assisting Veterans in their transition back into their communities.

Currently, just about all colleges offer at least a minimal degree of student psychiatric services. But surprisingly few institutions are staffing full-time advocates and resources provided solely for Veterans, including psychiatric services for Veterans. The truth of the matter is that student Veterans’ mental health needs tend to be similar to the needs of other students. But Veterans tend to have unique challenges that differ from their classmates who are on a traditional track of education.

The Clay Hunt SAV Act calls for the formation of no less than five integrated service networks that will be community oriented peer support programs. The networks will establish peer support training guidelines, as well as veteran peer support counselors.

The bill also includes plans for generating and maintaining a website that will store and disseminate information pertaining to Veteran healthcare services. This will be a collaboration between the VA and non-profit mental health organizations. The Clay Hunt SAV Act also establishes a pilot program to pay the student loans of psychiatrists who come to work for the VA.

The VA has tracked Veteran suicides, and the statistics are staggering; over 8,000 each year- an average of 22 per day. The Clay Hunt SAV Act is the latest and best attempt to combat that high suicide rate among the men and women who have served our country.