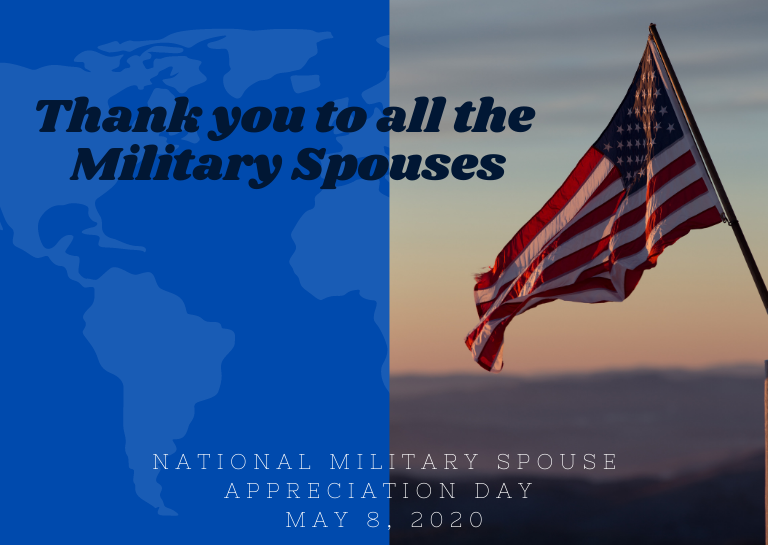 “Being loved deeply by someone gives you strength, while loving someone deeply gives you courage.”

Truer words cannot be spoken about the experience of a military spouse. While they’re not on the front lines, they are the backbone which supports our military, allowing U.S. service men and women to perform their considerable duties, every day.

The term “Military Spouse” describes a lifestyle which requires dedication and commitment to a cause greater than any single person or family. It involves unparalleled bravery in the face of danger and uncertainty. It calls for patience and humility in droves.

Similar to the Month of the Military Child, National Military Spouse Appreciation Day aims to highlight the unique sacrifices and unwavering devotion of U.S. military spouses around the world.

U.S. Armed Forces Day and Veterans Day celebrate our military men and women who are serving and have served the United Sates. Memorial Day honors those who have made the ultimate sacrifice in the name of our country. Service members are not alone in their dedication and bravery, though.

Some of the bravest souls to exist are at home and on-base, belonging to the spouses of our military men and women. From frequent moves and sleepless nights to aspirations that take a backseat for years on end, the contributions, sacrifice, and support provided by military spouses can be thankless. Despite this, spouses to our military men and women continue to stand by their families and their country. These unsung heroes definitely put in the work, and so often get none of the glory.

President Ronald Reagan observed this disparity. In response, he declared May 23, 1984 the first Military Spouse Appreciation Day. With proclamation 5184, he officially recognized the profound contribution made to the Armed Forces by our military husbands and military wives, day after day. Now celebrated on the Friday before Mother’s Day every year, the holiday has evolved from a day of commemoration to an event that has taken on a life of its own.

Military Spouse of the Year Award

Chris Hale, a veteran and the CEO of Neptune Holdings, established the Armed Forces Insurance Military Spouse of the Year Award in 2008. Military spouses from all six branches of the Armed Forces are nominated by their peers and are organized by base, district (Coast Guard), or state (National Guard).

Judging criteria includes overall involvement in the community, leadership skills, community-building ability, communication skills, and personal story. Nominees progress through four rounds of advancement starting with Base Winners. From there, the Top 18 are selected, Branch Winners are chosen, and the overall winner is announced just before National Military Spouse Appreciation Day.

The award commemorates not only the sacrifice and support of the recipient, but the contributions he or she has made to the military community at large. Past winners have used the influence this honor brings to establish programs and initiatives which add to their contributions on a larger scale.

The 2020 award recipient will be announced at 2:00 PM, ET on May 7th. You can catch the announcement, live on the Military Spouse of The Year Facebook page.

This year, Military Spouse Day is celebrated on May 8th. There’s no award, no date on the calendar, no amount of recognition that can fully honor the commitment and sacrifice of military wives and husbands. However, we would like to use this date to celebrate them to the best of our ability. It is vital that these incredibly important members of our community understand that their dedication to the U.S. Armed Forces does not go unnoticed.

So, thank you, to all of our military spouses, for your willingness to respond to the call of duty without hesitation. You are loved and appreciated more than you’ll ever know.