Military Blog
You are here: Home1 / Marine Will Serve Almost 3 Years for Stealing From Toys for Tots 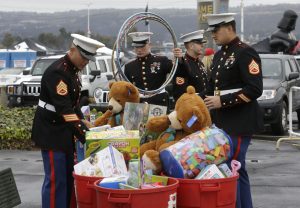 A 33-month prison sentence and restitution to the tune of $534,044 is the immediate future of former Staff Sgt. Christopher Aragon.

Aragon used his position as a Toys for Tots program coordinator to make payments to himself and defraud the Marine Corps. Toys for Tots is a program run by the United States Marine Corps Reserve which distributes toys to children whose parents cannot afford to buy them gifts for Christmas.

The program was founded in 1947 by reservist Major Bill Hendricks.

Aragon, 32, served as a supply chief for 3rd Force Reconnaissance Company and was the unit’s coordinator for its Toys for Tots program. Aragon will also have to pay $20,044.70 in restitution to the Marine Toys for Tots Foundation.

According to court documents, between December 2013 and August 2016, Aragon conspired with his wife, Teneshia Aragon, and Dana Davis, owner of the Runway Café in Mobile, Alabama, to defraud the Marine Corps by using an issued credit card to make unauthorized payments to himself as well as submitting false documents, invoices and unit rosters.

But the Corps picked up on the bogus charges during an audit and found serious discrepancies.

In May, all three defendants plead guilty to trying to defraud the Marine Corps.