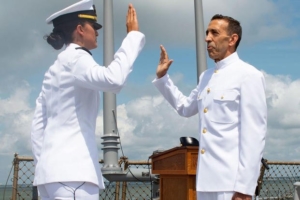 A 63-year-old heart surgeon has joined the Navy under a provision that allows individuals with in-demand skills to be exempt from age restrictions.

Tyrone Krause of Skillman, New Jersey, received a waiver that allowed him to enter the Navy Reserves in spite of the fact that he is one year past the typical age limit.

The board certified thoracic surgeon was commissioned as a commander on July 13th in Norfolk, Virginia, aboard the USS Ramage. His 27-year-old daughter, Laura, is an ensign on the destroyer and performed the ceremony.

The ceremony was especially meaningful to the father and daughter, given that the elder Krause said he was inspired to join after his daughter’s recruiter mentioned the Navy had a shortage of surgeons.

“I feel, surgically, I’m in my prime,” Krause said. “I could still operate very well, and if I can give back and help some of our young men and women in the military, that’s what I want to do.”

With more energy than most, Krause doesn’t have any plans to slow down. He hopes to work aboard a hospital ship, but for now his service will begin with once-a-month duty at a Navy clinic in Sandy Hook, New Jersey.

A great motivator and unofficial recruiter, Krause is spreading the word that it’s never too late to try something new.

“A lot of people don’t even you know you can join the Reserves and contribute,” said Krause. “A lot of people in the private sector have a lot of skills they can bring to the Navy and military in general. You can be 40 years old, 50 years old and your profession may be something that’s necessary in the military. You can certainly give back by joining the Reserves.”

Doctor Hired by VA Charged with Sexually Assaulting Female Patients Up to $70,000 Offered by Marines to Re-enlist and Become Squad Leaders Scroll to top
Follow a manual added link