Military Blog
You are here: Home1 / Up to $70,000 Offered by Marines to Re-enlist and Become Squad Leaders 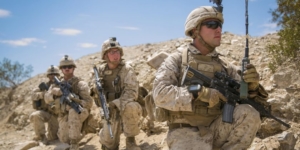 Up to $70,000 Offered by Marines to Re-enlist and Become Squad Leaders

The Marine Corps prides itself on being the world’s finest fighting force. To maintain this title, the Corps is launching initiatives in order to retain current Marines who are looking to advance their military careers to the next level by assuming more responsibility.

A disappointingly low completion rate for the infantry small unit leader course (ISULC) is prompting the Corps to award large cash bonuses to current Marines in the hopes of retaining them as experienced corporals and sergeants.

Only 359 Marines have obtained the 0365 military occupational specialty, about half of the number needed.

To fill the gap and entice more Marines to go to the school and move into the 0365 job field, the Corps is pushing the new initiatives that come with bonuses as high as $70,000 to entice its most competent junior enlisted noncommissioned officers stay in the Corps and move into the squad-leader MOS. Some bonuses may also be available for Marines who have already graduated the six-week ISULC course.

The service branch hopes to fill 300 squad leader billets slots with corporals and sergeants who have between five and seven years of service, and have either already gone through or be willing to commit to completing ISULC.

Bonuses are taxable unless the recipient is deployed to a combat zone where the tax exclusion applies.

First-term corporals and sergeants who are currently assigned to infantry battalions as 0311 riflemen can receive $10,000 to extend their contracts by two years, during which they would serve as squad leaders in their units. They also have the option to re-enlist for four years, become squad leaders, and remain in their units for two years, which would earn them a $20,000 bonus.