Military Blog
You are here: Home1 / Former US Army Soldier, Two Others Found Guilty in Murder for Hire 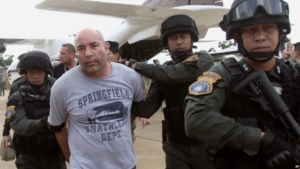 Former US Army Soldier, Two Others Found Guilty in Murder for Hire

A former U.S. Army sergeant and two other U.S. citizens were found guilty by a jury in Manhattan federal court in a murder for hire scheme in the Philippines.

Former U.S. soldier Joseph Manuel Hunter, Adam Samia and Carl David Stillwell were found guilty in the 2012 murder of Catherine Lee. Lee, a real estate agent, was involved in a dispute with Paul Le Roux, the Zimbabwe-born head of a multinational criminal organization.

Le Roux believed that Lee had cheated him on a land deal.

Hunter, 52, is currently serving a 20-year sentence stemming from a U.S. Drug Enforcement Administration sting operation that followed the 2012 arrest of Le Roux in Liberia. After his arrest, Le Roux admitted to shipping drugs and weapons around the world and to having ordered various murders. He set up a fake murder-for-hire operation to trap Hunter.

Hunter served from 1983 to 2004 in the U.S. Army, where he attained the rank of sergeant first class.  While in the Army, he led air-assault and airborne infantry squads; served as a sniper instructor; and trained soldiers in marksmanship and tactics as a senior drill sergeant.  Since leaving the Army in 2004, Hunter has arranged for the murders of multiple victims in exchange for money, among other completed acts of violence undertaken for pay.

Samia, 43, is a self-described “personal protection/security industry” professional trained in tactics and weapons, while Stillwell, 50, previously worked at a North Carolina firm that provides firearms training. The men were paid $35,000 each by Hunter to carry out the plot.

Lee was shot multiple times in the face and her body was discovered on a pile of garbage on the side of the road.

Samia and Stillwell returned home to North Carolina following the murder, and stayed there until their arrest in July 2015.

After his arrest, Le Roux admitted to shipping drugs and weapons around the world and to having ordered various murders. He set up a fake murder-for-hire operation to trap Hunter.