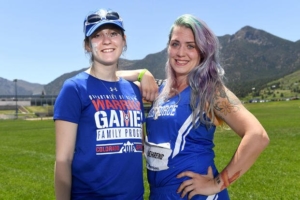 For Air Force Senior Airman Karah Behrend, the 2018 Department of Defense Warrior Games at the U.S. Air Force Academy had a much deeper meaning than just competing for a medal. Behrend was also going to meet her 19-year-old biological sister, Crystal Boyd, for the first time.

Although the Colorado Springs location was not quite the halfway point for Behrend, who lives in Texas, and Boyd, who lives in Washington State, it worked out to be the best meeting place for the sisters.

The women’s father was a veteran of Desert Shield/Desert Storm, whose relationship with Behrend’s mother ended upon his return. Behrend and her brother were later adopted by their mother’s new husband, an Army Ranger.

Behrend ended up tracking her father down, and during a long phone conversation, she was excited to find out that she had a sister.

Boyd, on the other hand, had always known she had two half-siblings.

“Our dad told me about her and our brother while growing up… I never knew how to find her so I just waited,” Boyd said.

Behrend’s six year Air Force career has been a hindrance to the sisters’ reunion, but military service was Behrend’s calling.

“My grandfather served during the Vietnam era. My biological father was in Desert Shield and Desert Storm. My adopted dad was a Ranger down in Panama for the Panama crisis. It’s just something our family does.”

Behrend, a mother of two, suffers from reflex sympathetic dystrophy, a rare disorder of the sympathetic nervous system that is characterized by chronic, severe pain. The onset of the disorder was the result of a surgical complication in 2015.

Boyd suffers from epilepsy, so she has a special understanding of what her sister goes through. She is proud that in spite of her sister’s condition, she forges on and competes in the athletic arena.