Military Blog
You are here: Home1 / Ft. Bragg Soldier Fighting to Save Wife from Deportation 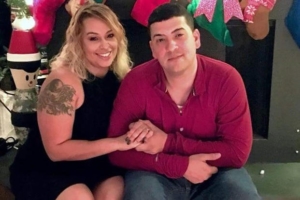 Ft. Bragg Soldier Fighting to Save Wife from Deportation

A routine traffic stop near Fort Bragg, North Carolina has resulted in the possible deportation of a U.S. Army spouse.

Army Staff Sgt. Felix Vega, who has served in the Army for almost 15 years, is fighting to keep his wife, Yadira Fuentes-Paz, in the country.

A citizen of Honduras, Fuentes-Paz was sold to a man by her mother and brought to the U.S. when she was only four years old. At 13 years old, Fuentes-Paz was homeless. A felony drug-trafficking charge at 21 led to her 2001 deportation and separation from her two young children, who were both U.S. citizens.

In 2004, Fuentes-Paz illegally re-entered the U.S. through Mexico.

Vega and Fuentes-Paz married in 2015, and she has been a Defense Department ID card holder since then.

In addition to being a military spouse, Fuentes-Paz is also a military mom, as her 24-year-old son is a Marine Corps sergeant.

“I’m willing to do anything for her,” said Vega, who is in the process of PCSing to Fort Lee, VA. “They said they were detaining her because she was a fugitive from ICE, but we were doing all the proper paperwork for her to get legal status so I never understood why they’d have her categorized under that.”

Military spouses, parents, and children who entered the U.S. illegally are often eligible for Parole in Place, allowing these family members of military and veterans to avoid deportation and apply for a green card while staying in the U.S. But the granting of parole in place is discretionary.  Therefore, criminal conduct, prior immigration violations, or other adverse factors that are revealed through the application process could affect the decision.

It is unclear how Fuentes-Paz’s previous felony conviction and deportation could impact her eligibility.

Former US Army Soldier, Two Others Found Guilty in Murder for HireThe Creation of a “Space Force” Could Take Years Scroll to top
Follow a manual added link