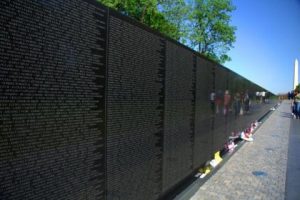 In a stunning move, the board of directors of the Vietnam Veterans Memorial Fund (VVMF) announced that after a strategic review of the Education Center project, there will be a shift of focus to online resources, handheld technology, education staff, mobile exhibits and partnerships rather than continue efforts to construct a physical building on the National Mall.

The long-stalled plan to build the education center next to the iconic “Wall” is being scrapped for lack of funding and general interest.

Chairman John Dibble said in a statement that “funding simply has not materialized” for the project, which originally was to have dealt with the history, context and legacy of the Vietnam War.

The memorial, dedicated in 1982, was the brainchild of Vietnam Army Veteran Jan Scruggs, who founded the Vietnam Veterans Memorial Fund and served as the president of the foundation until he retired in 2014. Scruggs spearheaded the VVMF’s legislative effort to get Congress to authorize the memorial and approve its location on the National Mall, and he shepherded the memorial’s controversial design past the United States Commission of Fine Arts and other federal and local agencies.

Scruggs announced the concept for the education center in 2000. At a symbolic groundbreaking in 2012, Scruggs said the center would also serve as a temporary memorial for the fallen of Iraq and Afghanistan.

“The veterans of Vietnam know what it is like to wait for a memorial — a healing place — to be authorized and constructed. Today’s heroes shouldn’t have to wait. Our goal is to have the education center at the Wall open in time to welcome home our last troops returning from Afghanistan,” he said at the time.

With a projected cost of approximately $84 million, the funds raised were just a little more than half of what was needed.

In the statement released by Dibble, he said, “We know many veterans and supporters are disappointed in this outcome. We also are disappointed that the early enthusiasm and support did not result in a completed building. Since the idea was developed in early 2001, the world is a very different place.”