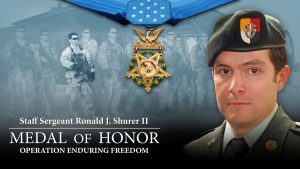 A former Green Beret medic who fought his way up a mountain in Afghanistan and braved enemy rocket-propelled grenades and sniper fire to treat wounded soldiers will receive the Medal of Honor, the military’s highest honor.

On October 1st, Ronald J. Shurer II received the upgrade to the Silver Star he had been previously awarded for his actions in April 2008.

Former Staff Sgt. Shurer II, who served with the 3rd Special Forces Group,  had been deployed to Afghanistan’s Shok Valley in Nuristan province. His task, as a medic, was to support operators who were hunting high-value targets of the Hezb-e Islami Gulbuddin, a militia group that had a foothold in the Shok valley.

“As the team navigated through the valley [April 6, 2008], a firefight quickly erupted, and a series of insurgent sniper fire, rocket-propelled grenades, and small arms and machine gun fire forced the unit into a defensive fighting position,” Army officials said in a release.

Shurer’s unit received word another unit was pinned down at another location and had sustained multiple casualties. Shurer moved quickly through a hail of bullets toward the base of the mountain to reach the pinned-down unit. While on the move, he stopped to treat a soldier wounded in his neck by shrapnel from a RPG blast.

“With disregard for his own safety, Sergeant Shurer took off through a hail of bullets and began scaling the rock face to get to the casualties,” his Silver Star citation states. “During initial movement to the base of the mountain, he treated a teammate wounded by shrapnel to his neck from an RPG blast that blew him off his feet.”

Then Shurer continued to fight his way down to the pinned-down forward troops, killing multiple insurgents.

“Sergeant Shurer rendered life saving aid to four critically wounded casualties for more than five and a half hours,” the citation reads. “As the lone medic at the besieged location, and almost overrun and fighting against nearly 200 insurgent fighters, Sergeant Shurer’s bravery and poise under fire saved the lives of all wounded casualties under his care.”

Using some nylon webbing that he found, Shurer also helped evacuate three critically wounded soldiers down a near-vertical 60-foot cliff, all while avoiding rounds of enemy gunfire and physically shielding the others from falling debris caused by numerous airstrikes.

Shurer is the 11th soldier to receive the Medal of Honor for heroism in Afghanistan. He now lives in Burke, Virginia, near Washington, D.C., with his wife Miranda and two sons, 10 and 7.