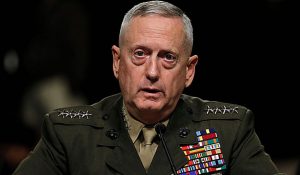 Defense Secretary Jim Mattis has spoken out against using private contractors in Afghanistan.

“When Americans put their nation’s credibility on the line, privatizing it is probably not a wise idea,” Mattis told reporters during a rare appearance in the Pentagon Briefing Room. Mattis was joined by Chairman of the Joint Chiefs of Staff Gen. Joseph Dunford.

President Trump had expressed a renewed interest in the idea, which had been proposed by Blackwater founder Erik Prince. Prince has proposed using former military specialists as contractors to conduct operations in Afghanistan over growing frustrations that the current Defense Department strategy isn’t producing lasting results.

In a recent press release, Prince outlined a plan involving a combination of private contractors and U.S. Special Forces who would mentor Afghan battalions, much the same as the U.S. is currently training, advising, and assisting Afghan troops now.

“What I am proposing will end the conflict, save the lives of hundreds of US armed forces personnel (and thousands of Afghans), and will cost only a fraction of what we currently spend. To emphasize, this is not a privatization of the war effort as has been wrongly stated by my critics. It is actually a reduction in the number of private contractors engaged in Afghanistan,” Prince wrote in the press release.

At the height of Operation Enduring Freedom, the U.S. had more than 100,000 boots on the ground. There are currently 14,000 U.S. troops in country, according to Gen. Dunford.

Mattis said any timeline for a troop withdrawal would be “situationally dependent” on Afghan forces’ ability to successfully maintain the security of the country so that terrorist groups won’t have safe havens from where they can plan attacks.