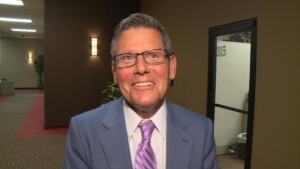 President Donald Trump has named a former White House senior adviser on veterans affairs to lead a new commission focused on mental health at the department.

COVER was created to examine the evidence-based therapy treatment model used by the VA for treating mental health conditions of veterans.

The announcement was made by Acting VA Secretary Peter O’Rourke in advance of Robert Wilkie, the next VA secretary, being sworn in.

In a statement, O’Rourke said Leinenkugel “has been an ambassador for change at VA, working to implement President Trump’s policies throughout the department over the past year and a half. As leader of this important new commission, Jake will continue to advocate for better care and services for his fellow veterans.”

Leinenkugel, who served six years in the Marine Corps and left with the rank of captain, is the former president of a large family brewing company. He had served as president of the Jacob Leinenkugel Brewing Co. for 26 years.

Leinenkugel has been instrumental in the creation of the VA’s “ChooseVA” branding campaign, which emphasizes a multitude of benefits and services to veterans, as well as promoting the the U.S. Department of Veterans Affairs as a great place to work.

Last February, Leinenkugel came under fire from veterans service organizations for a series of email exchanges with Camilo Sandoval, a former Trump campaign worker, where the two were trying to orchestrate the ouster of then-VA Secretary Dr. David Shulkin.

Shulkin, the only holdover from the Obama administration, had expressed dismay over what he said seemed to be political appointees in his office working against him, saying that they were “trying to undermine the department from within.”

Shulkin was fired the following month.

Next on Leinenkugel’s “hit-list” was then-VA Deputy Secretary Thomas Bowman,

Bowman retired in May.