Military Blog
You are here: Home1 / Attention Veterans: IRS May Owe You Money 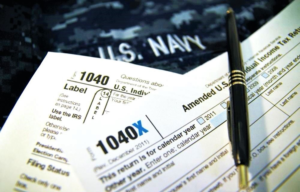 More than 130,000 U.S. veterans who were released from service due to injuries sustained in combat are due substantial federal income tax refunds because of a Department of Defense error that stretched on for decades.

The veterans who were wrongfully taxed could be eligible to receive a refund for taxes they paid on disability compensation.

The IRS had put the burden on taxpayers to ask for a refund in such situations. But in December, 2016, Congress passed the Combat-Injured Veterans Tax Fairness Act, a law requiring the Defense Department to notify veterans that they may be eligible to be reimbursed for taxes withheld between 1991 and 2016.

The DoD is currently mailing letters to veterans who received a VA determination of eligibility for service-related disability compensation or Disability Severance Pay for combat-related injuries.

The letters outline the amount received in Disability Severance Pay, which can be included on tax Form 1040X to file their claims.

The default amount of the compensation is dependent on the year taxed:

But the National Veterans Legal Services Program (NVLSP), a nonprofit advocacy group that originally discovered the tax mistake, estimates that some veterans are due refunds exceeding $10,000.

While the default method is the simplest, it could result in a lower payout if the servicemember was in the military for a long time, or was a higher-ranking officer.

If you did not receive a letter but believe you are entitles to a refund, you can also file a 1040X, If you don’t have the necessary supporting documentation, you can request your records from the National Archives.

Veterans (or their surviving spouses) who are struggling with the process should contact their Veteran Service Officer for assistance. Taxpayers can also get help from the IRS Taxpayer Advocate’s office. Or you can email NVLSP at [email protected]